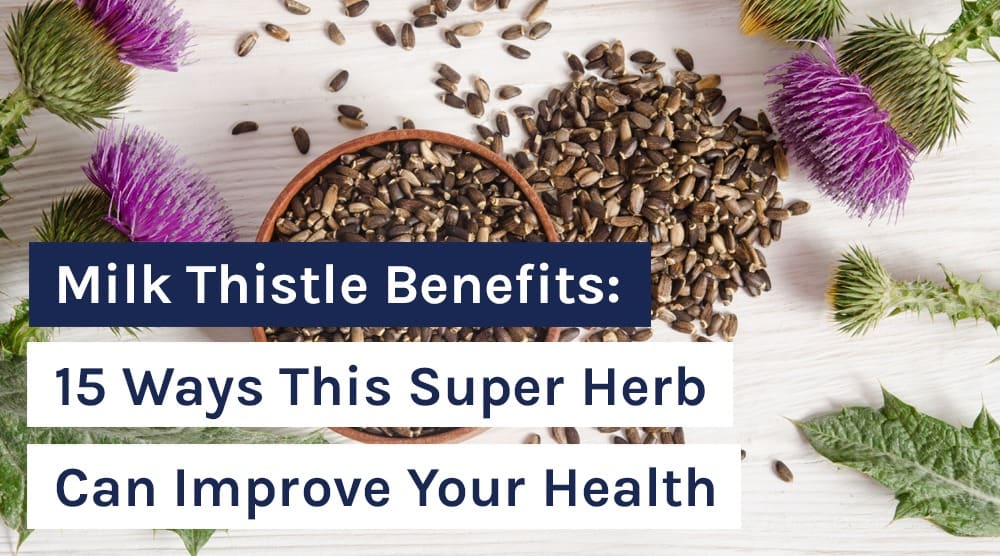 Do you want to help your body’s built-in detoxification system? Then, simply put, supporting your liver is a must-do. One well-known natural herb for helping to detoxify the liver is milk thistle (Silybum marianum). Milk thistle is often referred to as the “liver herb” and taking it is a fantastic way to give this vital detoxifying organ (and your whole body) that extra boost. Read on to discover more about how milk thistle benefits your health.

What Is Milk Thistle?

Truth be told, milk thistle isn’t much to look at. You might even mistake it for a weed if you saw it in your backyard, with its thorny leaves and bulbous, purple flowers. In fact, in many areas outside of its native land (Southern Europe through Asia), it’s considered an invasive weed.

For thousands of years, however, people have used the leaves, seeds, and flowers of Silybum marianum as a liver detoxifier and overall health tonic.

Other names for milk thistle include Mary thistle, blessed thistle, Marian thistle, Mediterranean milk thistle, variegated thistle, Saint Mary’s thistle, and Scotch thistle. (It should not be confused with holy thistle – Cnicus benedictus – which is a different thistle which also boasts many health benefits.)

Whatever it goes by, what makes milk thistle such an amazingly healthy herb are phytonutrients called flavonolignans. In particular, a combination of three flavonolignans which are collectively known as silymarin. They are:

Silymarin consists of about 50% silybin, with silydianin and silychristin making up the rest.

The Best Sources of Silymarin

The seeds and flowers of the milk thistle plant are an especially potent source of silymarin, but the leaves can contain it as well. Milk thistle can be found in the whole dried form in herb shops and used as a tea. Increasingly, however, it is powdered and used alone or in conjunction with other liver-supporting herbs in specific formulas.

Supplementing with milk thistle can be a great addition to your everyday routine, especially during times when your liver needs a little more support (like just after the holidays or a vacation where you over-indulged).

Also, as we shall see below, studies have found that those with specific liver problems and conditions such as autoimmune diseases, fatty liver disease, heavy metal toxicities, and even cancer (e.g., breast cancer) can benefit tremendously from adding milk thistle to their existing healing protocol.

Milk thistle can be a great overall tonic for health every day. Apart from a little-upset stomach if you take too much, there are no known side effects. Of course, if you have a known allergic reaction to milk thistle, you’ll need to avoid it.

Always remember that plants can be potent, so be sure to seek medical advice from your healthcare provider before taking – especially if you have special health concerns or are on any medication. For example, milk thistle has been reported to counteract some chemotherapy drugs.

There is a reason why milk thistle is called the “liver herb.” The flavonoid combo of silymarin (and especially the phytonutrient silybin) can help rebuild liver cells while it removes toxins from that organ at the same time.

The liver is central to detoxification in the body, such as storing key hormonal substances, metabolic processes, and cleaning out the blood.

A systematic review of clinical studies of milk thistle requested by the National Center for Complementary Medicine (part of the National Institutes of Health) back in 2000 reported that:

“Evidence exists that milk thistle may be hepatoprotective through a number of mechanisms: antioxidant activity, toxin blockade at the membrane level, enhanced protein synthesis, antifibriotic activity, and possible anti-inflammatory or immunomodulating effects.”

A 2005 report published in Alternative Medicine Review found that the flavonoids in milk thistle act to protect the liver by significantly boosting its resistance to “toxic insult.”

#2: Milk thistle is GREAT for the immune system.

Because it provides such support for the liver, milk thistle also fortifies the immune system and can even help reduce the effects of aging.

This is because milk thistle is also a super antioxidant, removing pollutants, going after pathogens, and preventing free radical damage in the body. The research suggests that milk thistle supplementation can help support the body against some of the most common disease conditions.

Milk thistle has been shown to help reverse damage to the liver caused by heavy metals such as mercury, arsenic, cadmium, and lead. It can protect against these metals because of the boost it gives to the liver.

Heavy metal toxicity is a serious issue that most people face at some point during their lives, because of pollutants in the air and water, as well as amalgam dental fillings, which can contain up to 50% mercury.

Heavy metal toxicity is a serious issue as it can lead to:

Milk thistle supplementation, as well as healing the gut through probiotics, can aid the body in eliminating these toxins and restoring balance. The antioxidant power of silymarin also helps to protect your body from free radical DNA damage that can lead to abnormal cell growth.

Silymarin can boost the production of the super-antioxidant glutathione, which is found in its most potent form when it is produced inside the body. Glutathione is produced in part within the liver, and milk thistle has been found to strengthen liver cell walls.

A January 2017 study discovered that milk thistle helped to reduce the “inflammatory cascade” associated with hepatitis C while at the same time modulating the immune system and acting as an anti-viral agent, which can also lead to inflammation reduction system-wide.

#7: Milk thistle can help to lower your risk of obesity.

Obesity is often the result of a vicious cycle of poor lifestyle choices, poor metabolism, poor detoxification, low energy, high toxic load, and inflammation. By supporting detoxification pathways, those who suffer from obesity can receive a helping hand with their weight loss goals.

A 2004 report published in The Journal of Alternative and Complementary Medicine hypothesized that human exposure to chemical toxins can have damaging effects on weight control mechanisms within the body and may even be a major factor in the global obesity epidemic.

Protecting the body from these toxins, which milk thistle does, may result in a normalization of weight regulation functions.

#8: Milk thistle may be beneficial for people with diabetes.

While milk thistle’s benefits to the liver have been known for quite some time, researchers are just beginning to discover its effects for helping to regulate blood sugar levels and insulin resistence, which may benefit those with type 2 diabetes.

A 2007 study conducted by the Universidad de Salamanca in Spain found that milk thistle has “anti-hyperglycemic properties” and may help regulate “liver gluconeogenesis.”

#9: Milk thistle can help with depression.

Liver overload can lead to a neurotoxic buildup in the brain, which can exacerbate and even cause mental imbalances such as depression, anxiety, bipolar disorder, and schizophrenia.

By supporting detoxification in such a major way, milk thistle supplementation can help to turn depressive conditions and other neurological imbalances around.

Studies have shown that milk thistle can help prevent skin damage such as dark spots as well as lines and even wrinkles by protecting from UV light. Again, this is because of its antioxidant properties, which also helps protect joint tissue health.

#11: Milk thistle can help you detoxify from too many pharmaceutical pain relievers.

Because of all the support it provides for the liver, milk thistle can assist with detoxing from heavy pharmaceutical use, helping you to avoid the dangerous side effects of long-term use.

A 2010 study conducted by the University Magna Graecia in Spain found that silymarin from milk thistle helps to counter the negative side effects of heavy acetaminophen use.

#12: Milk thistle can help you after too much alcohol consumption.

Many studies suggest that it can even help to reverse the damage caused by alcohol consumption. Just to be clear, however, taking milk thistle is not a replacement for cutting back if you drink in excess on a regular basis.

Milk thistle can be a great boost for your gallbladder. The gallbladder is a small, oblong-shaped organ that sits just below the liver and is responsible for the production of bile – a high alkaline fluid essential for digestion.

Many studies, including a 2011 meta-analysis published in the Journal of Advanced Pharmacy Education & Research, have linked it to a reduction in gallstones.

Studies also suggest that milk thistle can be beneficial for those with cholestasis, a common condition where the gallbladder stops making bile, or bile production is severely limited.

It’s good news that the conventional medical community has acknowledged the healing power of milk thistle enough that it has been approved as a “therapeutic treatment” for many kinds of liver disease, including fatty liver.

Fatty liver is caused by a build-up of fat in the liver which causes the liver’s function to wane and can lead to diabetes, cirrhosis, and liver cancer.

While fatty liver disease was once associated only with alcoholics, it’s now of major concern to an increasing number of individuals in industrialized countries. Fatty liver is associated with eating the standard American diet (SAD) and possibly to GMOs as well.

#15: Milk thistle is great for individuals with autoimmune disease.

Many conventional treatments for the dozens of autoimmune conditions that exist today, such as lupus, rheumatoid arthritis, and MS rely on harsh drugs that act to suppress certain mechanisms of the immune system.

Natural substances such as milk thistle help to balance the immune system so that proper communication and function can gently and gradually be restored.

Milk thistle’s liver-boosting properties can also be of great benefit to autoimmune disease sufferers, who often have problems with sluggish detoxification pathways.

By now, you should be convinced of not only the amazing milk thistle benefits but also how supporting your liver can help your entire body stay healthy and disease-free. There’s no doubt about what generations of Europeans and others have known for so long: the humble plant known as milk thistle is a true gift from nature!

Milk Thistle Is an Ingredient in New Organixx Daily Detox

Milk thistle is the first ingredient in our new Organixx Daily Detox powder. It’s one of six powerful botanicals selected for their ability to gently detox your system for robust immune protection all year round.

Beneficial effects of silymarin on estrogen-induced cholestasis in the rat: a study in vivo and in isolated hepatocyte couplets

A review of the bioavailability and clinical efficacy of milk thistle Phytosome: a silybin-phosphatidylcholine complex

Silibinin Reduces the Impact of Obesity on Invasive Liver Cancer

Bioremediation and Tolerance of Humans to Heavy Metals through Microbial Processes: a Potential Role for Probiotics?