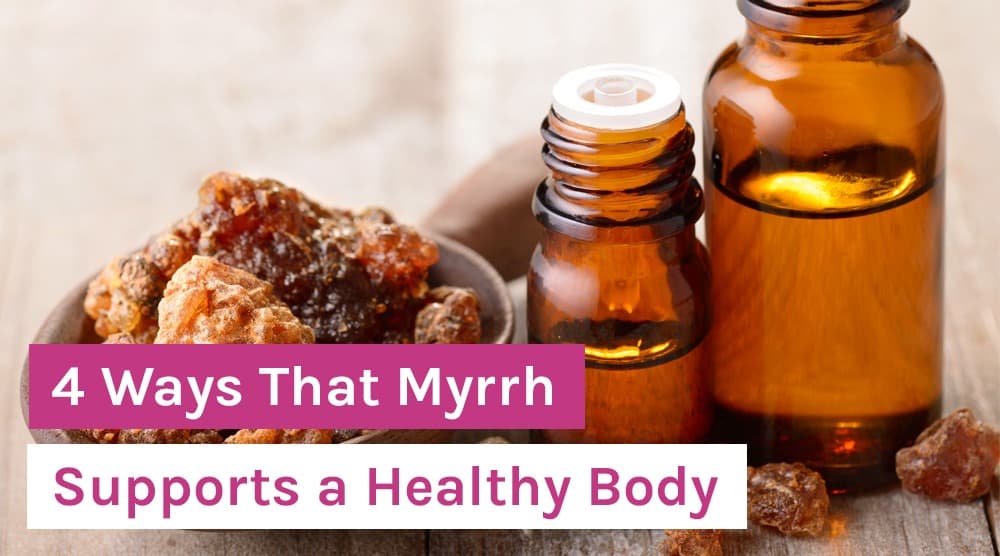 The biblical account of the wise men from the East gifting gold, frankincense, and myrrh to the newborn Christ is a familiar story to Christians all throughout the world. But the consideration of myrrh (Commiphora myrrha) as a precious substance of great worth extends far beyond the Bible and the Middle East.

The various preparations and extracts of myrrh gum (resin) and myrrh oil also have an extensive history of use in traditional healing systems including Ayurveda and traditional Chinese medicine.

Though it’s perhaps most known for its spicy, fragrant odor, which was traditionally used for embalming the dead, myrrh has also long been used as a natural antiseptic for purification in cleaning wounds and preventing infections.

The purifying essence of this resinous sap from the myrrh tree is similarly widely appreciated as having a calming effect when inhaled, lending credence to its widespread use as an incense. In the same vein, myrrh essential oil is considered one of the best essential oils to use for prayer and meditation.

Both empirically throughout the ages and scientifically in modern times, myrrh has proven itself invaluable for a variety of special purposes. And especially in modern times, science has uncovered even more about the unique properties of myrrh that indicate its usefulness in a range of other health applications.

Here are some of the most noteworthy health benefits of myrrh that have been reported in scientific literature. (Note: Always seek medical advice from a qualified healthcare practitioner when addressing specific health issues.)

There are two classes of primary active compounds in myrrh that lend to its efficacy in supporting a healthy immune response: sesquiterpenes and terpenoids.

Both of these compounds are found in a variety of food and plants sources.

Studies show that sesquiterpenes and terpenoids support the body in soothing inflamed areas, while also protecting against cell damage and the formation of chronic disease [1].

This is particularly true in the intestinal tract, where myrrh has demonstrated benefits in helping to protect the intestinal barrier lining from damage.

Serious gastrointestinal conditions like ulcerative colitis have been shown in the scientific literature to respond positively to the use of myrrh, which appears to exert both protective and healing effects when taken in sufficient quantities.

A 2017 study published in the International Journal of Colorectal Disease, concluded that myrrh was able to aid the body in protecting against three different types of colitis [2]. Another 2016 study revealed specific benefits against acetic acid-induced ulcerative colitis [3].

Some toothpastes and oral care products contain myrrh for much the same purpose, as its extracts have been shown to help protect teeth and gums against the types of inflammation that can lead to things like gum disease, gingivitis, and pyorrhea.

In Germany, myrrh powder is actually government-approved for

treating inflammation of the mouth and throat, the tannins in its resin being recognized as the primary active ingredients in this process [4]. Research conducted by the Dental Research Center at the College of Dentistry at the University of Tennessee also found that myrrh oil is cytotoxic against gingival fibroblasts and epithelial cells [5].

Many of these same benefits occur when myrrh is applied to inflamed skin, helping to soothe and relieve swelling while promoting elasticity and healthy aging. Applying a small amount of myrrh topically (or adding to skin care products) may also support the body in healing skin infections and promote faster healing from wounds and sores. Be sure to dilute heavily with a soothing carrier oil if you have sensitive skin.

Besides addressing disease-causing inflammation, myrrh also appears to support the body in reducing disease-causing oxidative stress. One study published in the journal Food and Chemistry Toxicology, for example, found that the antioxidant potential of myrrh is so high that it may support healthy liver function [6].

With an Oxygen Radical Absorbance Capacity (ORAC) value of 379,800 µTE/100g (to put this into perspective, oranges have an ORAC value of 750), myrrh has the potential to help in many other areas as well [7].

In a study on diabetic rats, extract of Mukul myrrh (C. mukul) from India was found to have a beneficial effect on both oxidative stress marker enzymes and hepatic marker enzymes. In their report, the researchers concluded:

“our data indicate the preventive role of C. mukul against STZ-induced diabetic oxidative stress; hence this plant could be used as an adjuvant therapy for the prevention and/or management of diabetes and aggravated antioxidant status [8].”

In a 2017 study published in the Journal of Evidence-Based Complementary & Alternative Medicine [9], researchers gave women with hyperlipidemic type 2 diabetes either an herbal combination capsule which included myrrh and myrrh resin as two of the three ingredients, or a placebo.

“the herbal combination improves glycemic control and lipid profile in women with hyperlipidemic type 2 diabetes without any adverse events.”

Whether inside the body or on the skin, infection-causing pathogens are another target for myrrh. Studies reveal myrrh’s immune-boosting potential may be effective at supporting the body against conditions ranging from acne, sore throats, and the common cold, to more serious health conditions like pneumonia and even Candida albicans.

In general, myrrh protects against:

This, again, being why it was used historically in the preparation of the deceased. It also supports the healthy repair of cellular tissue throughout the body.

common throughout Asia, Africa, and tropical America. Treatment of schistosomiasis is chemotherapy with the drug praziquantel. But due to drug resistance, researchers tested myrrh on 204 patients with schistosomiasis to determine if it was effective at ridding the body of two different types of parasites: S. haematobium and S. mansoni.

The researchers reported in The American Journal of Tropical Medicine and Hygiene that:

The constituent counterpart to terpenoids in myrrh, sesquiterpenes, serve their own unique role in helping to balance the glandular system, including the hypothalamus, which is recognized as the emotional center of the human body. It is here that the endocrine system connects to the nervous system, regulating both the release and inhibition of hormone production all throughout the body.

According to Robert M. Sargis, MD, the main purpose of the hypothalamus is to maintain homeostasis, or internal balance, within the human frame. Its primary functions include the regulation of nearly every component system of the body, including heart rate and blood pressure, body temperature, fluid and electrolyte balance, appetite and body weight, glandular secretions in the stomach and intestines, the production of various substances necessary for the pituitary gland to release hormones, as well as sleep cycles [11].

In addition to its ability to support the body in countering oxidative stress and inflammation, there are numerous published and ongoing studies examining myrrh’s relationship to cancer. Studies suggest that it inhibits angiogenesis, a process by which new blood vessels develop to supply “food” to cancer tumors.

For example, in a rat study published in the journal Chemico-Biological Interactions in 2017, myrrh extract was reported to have helped to improve liver function marker enzymes and prevent cancer cell proliferation. The researchers stated:

“these results provide evidence that C. molmol resin [myrrh] has a potent chemopreventive activity, possibly by up-regulating the Nrf2/HO-1 signaling and attenuation of inflammation, angiogenesis and oxidative stress [12].”

In a 2011 study published in the Journal of Medicinal Plants Research,

None of this should be taken to mean that myrrh in any way prevents or cures cancer and you should always seek medical advice from a qualified healthcare provider. However, in addition to other healthful practices (i.e., good nutrition, sleep, movement, and stress reduction), research appears to show that myrrh can help to support a healthy immune system that is better able to ward off disease.

Women who are pregnant or breastfeeding should avoid any internal use of myrrh. As noted above in benefit #2, myrrh may lower blood sugar. Therefore, anyone taking diabetes medication who is considering taking myrrh needs to work with their doctor to ensure blood sugar levels do not drop too low.

Of great importance, as well, is the quality of the myrrh oil used for therapeutic effect. Avoid essential oils that have been extracted using caustic chemicals such as hexane in preference for methods such as steam distillation.

When purchasing myrrh oil or products containing myrrh, only purchase quality products from reputable companies that you trust.

Joint & Muscle Care is a revolutionary supplement that takes three of the strongest inflammation support agents in nature (frankincense, myrrh, and turmeric), and combines them in the same perfect union treasured by the ancients. Available in capsule form or as an essential oil blend called Magi-Complexx.

[1] Molecular Basis of the Anti-inflammatory Effects of Terpenoids

[9] Effects of an Herbal Combination on Glycemic Control and Lipid Profile in Diabetic Women: A Randomized, Double-Blind, Placebo-Controlled Clinical Trial.

[11] An Overview of the Hypothalamus: The Endocrine System’s Link to the Nervous System