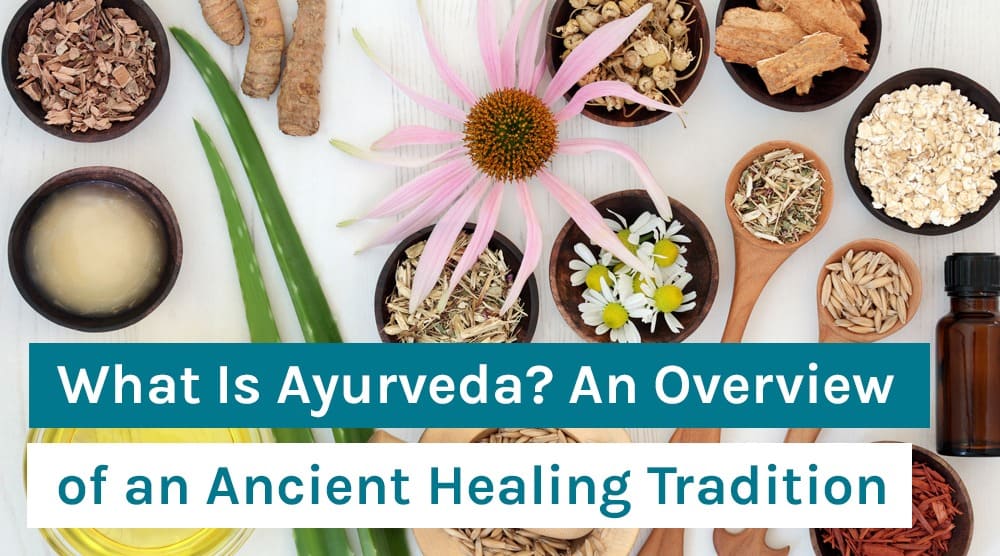 What Is Ayurveda? An Overview of an Ancient Healing Tradition

What is Ayurveda? It’s an ancient health & healing system from India of conscious, natural, and holistic living that works to enhance physical and psychological well-being, promoting longevity for the body as a whole.

Rejecting a disease-based mindset, Ayurvedic principles emphasize that we are self-reliant, self-healing beings who can maintain (and regain!) good health simply by consuming healing foods, living a balanced lifestyle, and working towards inner peace. Sounds a lot like many modern-day health recommendations, doesn’t it!

When translated from Sanskrit, Ayurveda means “the science of life,” since the Sanskrit root ayur means “longevity” or “life” and veda means “science” or “knowledge.” This ancient traditional practice is designed to nourish the mind, body, and spirit in a gentle, easy manner over the entire duration of one’s life.

The Historical Traditions of Ayurveda

The knowledge of Ayurveda, it is said, was passed on by holy and learned men via oral learning tradition, until it was collated into text form roughly 5,000 years ago.

From their observations, these ancient healers concluded that while change is the essence of life, it is possible to adapt to these changes and thereby attain long-lasting health.

In other words, our ability to balance in our adaptation to change rewards us with health, while lack of balance translates as ill-health or disease. Conscious living by aligning our inner nature, or microcosm, with outer Nature, or macrocosm, is the key.

The oldest known texts on Ayurveda that are still available are the Charaka Saṃhitā, the Sushruta Saṃhitā, and the Ashtanga Hridaya.

These texts detail the effects that the five elements found in the cosmic system – specifically, earth, water, air, fire, and space – have on our individual body systems. They also explain the importance of keeping these elements in balance to ensure a healthy, happy, and long life.

How Does Ayurveda Work?

Ayurveda is based on the fundamental concept that no two people are alike. Therefore, any one particular diet or lifestyle habit is unlikely to benefit every person in the same way.

Instead, Ayurveda helps people to identify and understand their predominant dosha – defined as one of three energies, or collection of physical, mental, and spiritual traits – that add up to make each one of us unique.

Further, Ayurveda also explains how to regain health when the system of doshas is out of balance. Because such bodily imbalances are believed to lead to disease, the practice of Ayurveda seeks to restore and maintain health by correcting these imbalances.

For instance, food is considered medicine in Ayurveda. What you eat can serve you or work against you, depending on your predominant dosha, as well as your lifestyle habits at that time. Specifically, food can make you energetic or lazy, happy or sad, strong or weak, and focused or distracted. According to Ayurveda, what you eat directly influences your health and well-being.

Many people in the western world are now somewhat familiar with the concepts underlying Ayurvedic foods and healing modalities. Beyond the foods we eat, this ancient approach also asks us to look at our lives holistically.

Ayurveda also considers many other factors that influence health, such as how you nurture your friendships and relationships, your mindfulness (or lack of it) in your daily life, and your approach to life in general.

Ayurveda places great importance on lifestyle – including food habits and daily routines – and provides guidance on how to adapt these for better health based on your age, current state of health, and the change of seasons relative to your predominant dosha.

Constantly assessing ourselves through such a wide-ranging, holistic lens does more than help us lose weight and improve our health – it can significantly impact the very quality of our lives.

According to Ayurveda, each person is influenced by certain elements more than others because of the way they are, or their natural constitutions.

Ayurveda categorizes all such constitutions into three different doshas – each of which has certain tendencies, habits, and ways of being that separate them from the other types.

Every person contains all three doshas. However, according to Ayurveda the proportion varies according to the individual and usually, one or two doshas predominate. Within each person, the doshas continually interact with each other and with the doshas in all of nature.

Ayurveda says that your predominant dosha not only, as well as the temperament of your mind and emotions.

What Dosha Type Are You?

Pitta is said to balance Vata and Kapha energies by keeping them fired up by virtue of its fiery quality.

Ayurveda Says Balance Is the Key to Staying Healthy

Ayurveda not only explains how we can keep our predominant dosha in balance but also how we can identify imbalances and how we can restore balance via our dietary and lifestyle habits.

Some people are said to be dual-dosha types, made up of a combination of two of the three doshas. For example, people who are “Pitta Kapha” will have some tendencies of each of these two doshas, but with Pitta dominating.

By helping us to understand the sophisticated nuances of our natural constitutions, Ayurveda provides examples of what we can do to keep ourselves healthy and happy.

The Ayurvedic theory of disease states that imbalances in our doshas happen either because one particular dosha is “aggravated” or in excess, or because it is “depleted” or reduced.

Specifically, if our predominant dosha is either excessive or depleted, we become more susceptible to disease. Ayurvedic solutions to restore imbalanced doshas include massage with oils containing specific herbs, yoga, and meditation, as well as customized diets that target and aim to restore inner balance.

Perhaps the most important lesson Ayurveda has to teach is that the state of our health is literally up to us − which very much aligns with the emerging science on Epigenetics. Every day of our lives, every hour of every day, we can choose to live either in health or illness.

When we choose wisely, Nature rewards us with health and happiness.

When we choose unwisely, Nature sets us straight – we fall into disease and get a chance to rest and rethink our choices.

So, what is Ayurveda? To summarize, the theory of Ayurveda provides profound insights into how we can live life in harmony with Nature and natural laws and rhythms. On the practical side, Ayurveda provides clear guidelines for managing our dietary and other daily routines, stress management, and exercises for increased fitness and alertness which help us take – or regain – control of our lives and health.

Ayurveda Lifestyle Wisdom: A Complete Prescription to Optimize Your Health, Prevent Disease, and Live with Vitality and Joy

Ayurveda: The Easy Ayurveda Cookbook – An Ayurvedic Cookbook to Balance Your Body and Eat Well

Theory of Ayurveda (An Overview)

The Art of Living: Ayurveda