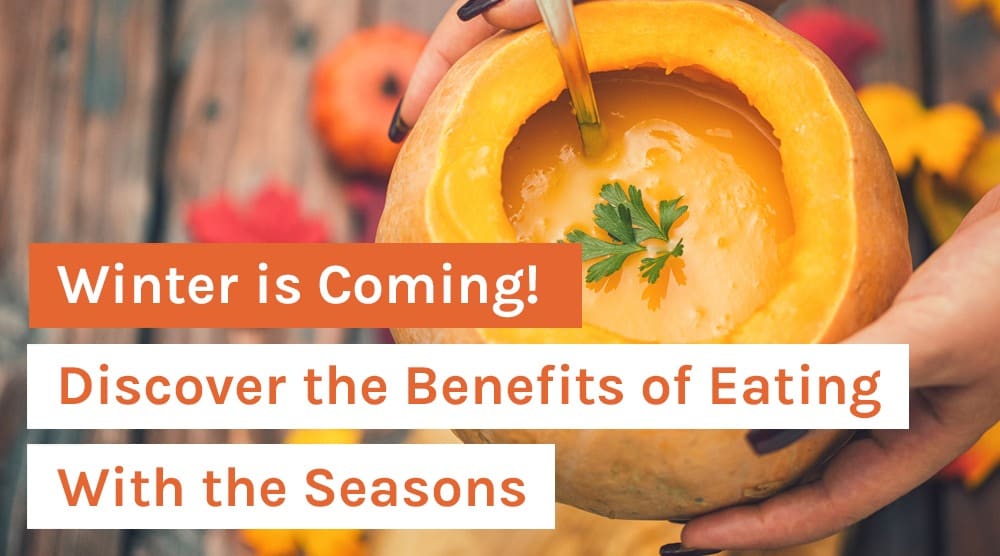 Winter is Coming! Discover the Benefits of Eating With the Seasons

The official first day of winter is only days away and the holiday season is in full swing. That means food… lots and lots of it in the break room at work, on grocery store displays, at your favorite diner, and prepared especially for you by relatives and friends during holiday visits.

If you’re like most people, you gobble it all up because (let’s face it) as soon as the weather turns, your munchie-factor goes through the roof. Unfortunately, so does that winter weight gain.

So, what gives? Is our tendency to eat more in colder weather just a product of social conditioning or is our body trying to tell us something?

According to a study conducted by the University of Georgia in the early 1990s, human beings as a whole tend to eat more and feel hungrier as the weather turns from warm to cool.

“The results suggest that even with modern heating and lighting, seasonal rhythmicity of food intake persists in humans and is a major influence on eating that may act by suppressing satiety mechanisms,” say the U of G researchers.

They found that individuals eat an average of 200 more calories a day in the beginning days of autumn when days start to get colder and darker. They found that hearty appetites taper off, however, in the winter and spring.

“We are driven by things implanted in our brain a long, long time ago,” says University of Massachusetts cardiologist Ira Ockene in a recent NPR interview. He has long been fascinated with how people eat with the seasons and why.

Ockene says extra hunger has to do with the availability of light as well as cold. He compares what we do to how chipmunks behave when they store up all those chestnuts for the coming long, cold winter. Lack of light prompts us, on a subconscious level, to eat more food and also to eat faster.

Another big reason for the body’s desire for extra calories as summer turns to fall is physiological. Scientists have discovered that the body’s constant search for warmth during the cold months, seen in the act of shivering, takes a lot more energy than one would expect. In fact, some estimates claim that just 15 minutes of shivering can burn about 100 calories and produce effects in the body that are similar to exercising.

A recent investigation conducted by Australia’s Garvan Institute of Medical Research found that shivering can stimulate the conversion of “white fat” to “brown fat” in the body.

While white fat is known as “energy-storying” fat, brown fat is energy-burning. This same conversion has been known to happen when a person exercises, leading some to propose that this mechanism could be used to fight diabetes and obesity. Controlled hypothermia, also known as cryotherapy (cold plunge anyone?), may do the same thing.

We would never suggest standing out in the snow in your shorts to get out of exercising. Still, even if a person’s teeth are not chattering, just a slight drop in temperature can kick in something called “nonshivering thermogenesis (NST).” This is when the body is not twitching because of the cold, but is working just as hard internally to keep warm.

What’s the point of all this when it comes to how we eat? Simply put: more energy expended equals a greater need for replenishment, i.e. more protein-rich and often fat-rich food.

Lessons From Ayurvedic Medicine: Fuel Your “Inner Flame” by Eating With the Seasons

What kind of food is best to consume as the days grow shorter and colder? For many people, the extra calories come from additional carbs in the form of sugary treats. But is that really the healthiest way to prepare for the long, cold winter?

The answer might come from the wisdom of many ancient healing traditions that have long used the turning of the seasons to guide their eating practices.

One such ancient healing tradition is Ayurveda. Practitioners of this ancient form of medicine have long held to the concept that food is medicine. In Ayurveda, the most important factor to consider outside of eating for your particular dosha (vatta, pitta, or kapha) is if the food consumed also helps to cultivate your “inner agni,” or “inner flame.”

For Ayurvedic practitioners, the agni is life force, so the less we have of it, the less “life force” we have within us. In Chinese medicine, this life force energy is known as “Chi.”

Following Ayurvedic food practices means considering the following factors, regardless of what time of the year it is:

Eating with the seasons is called Ayurvedic Ritucharya in the Ayurveda tradition. In order for our food to cultivate the best agni, eating with the flow of the regional geography and natural elements where we live is vital.

As a general rule Ayurveda recommends eating cooling foods in summer and early fall and then, as the weather turns colder, to focus on foods that gently warm the body.

A partial list of foods that are considered to cultivate warmth include:

For all seasons, Ayurveda experts say to prepare and eat plenty of organic foods that represent all colors. Nutrients and phytochemicals that reside in fresh fruits and vegetables help to detox the body as well. Plus drinking plenty of filtered, room-temperature water during the cool months aids in flushing those toxins right out of the body!

Can You Eat Meat and Still Eat Ayurvedic?

Although this may not have been an option when Ayurveda first came to the West about 100 years ago, because of the success so many individuals have had with anti-inflammatory, low carb diets such as Paleo and ketogenic, modern Ayurvedic practitioners like Dr. Akil Palanisamy are getting creative in developing “paleovedic” eating plans for their omnivore clients.

Options for good paleo-focused foods to consume for the colder months might include:

Let Fall and Winter Be a Time of Reflection, Rejuvenation & Connection

Many ancient traditions see the cold-weather months as a time to reflect, renew, and rejuvenate in preparation for the warmer months, when people tend to be more active.

This just makes logical sense, especially if you look to the natural world. Think of the bear who builds his body up for that deep, winter-long snooze; that sleep is a time for the bear to rejuvenate its body.

Unfortunately, in our human world we cannot sleep the winter months away, but we can choose to slow the tempo of our lives down a little bit by consciously choosing what we eat and by eating mindfully and with nourishing and detoxifying our body in mind.

In addition, eating with the seasons where you live also means learning about what foods grow in your vicinity, and at what time of year. Always try to purchase organic locally-grown produce and regionally-raised animal products whenever you can, and don’t be afraid to try heirloom varieties of vegetables and fruits.

In this way, not only are you learning about the geography of your region, you’re also supporting seed diversity and preservation, and your local economy to boot!

Why Are We More Hungry In The Winter?

Evidence That Shivering and Exercise May Convert White Fat to Brown

Q+A: It's Cold Out There. What Are Some Warming Foods, According to Ayurveda?

Ayurvedic Routine According to Season

What the Heck Is the Paleovedic Diet?