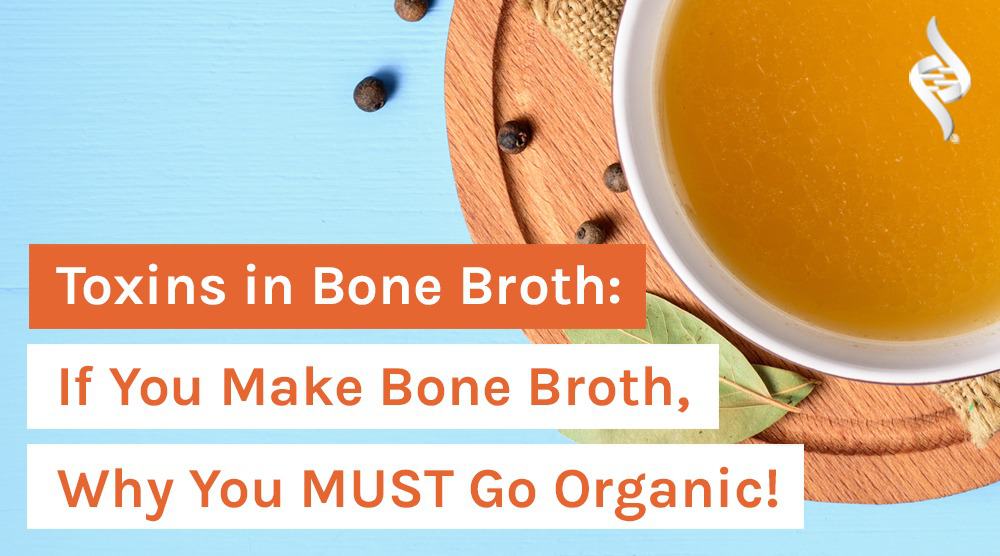 Toxins in Bone Broth: If You Make Bone Broth, Why You MUST Go Organic!

Bone broth is one of the healthiest foods you could add to your everyday routine. It has been shown to lower inflammation, heal the gut, and much more. There are some guidelines you must adhere to, however, in order to make the absolute most out of the bone broth you prepare. At the very top of the list of things you can do is to make sure that all of the ingredients you use for your broth are 100% organic and chemical-free.

Read on to learn more about the risks of using commercial animal products in bone broth and some tips to help you make the most nutritious and toxin-free broth as possible.

Why You Have to Go 100% Organic with Your Bone Broth

Bone broth is made by boiling animal bone for long periods of time, usually sourced from beef, chicken, or fish. Most experts advise that the best bone broths are boiled for at least 12 hours, although some people boil bones for up to 24 hours, or even 36 hours. Bone broths that are boiled in a pressure cooker (e.g., Instant Pot®) usually cook for about three hours.

Bones are boiled for such a long time for a very specific reason. Most of the nutrition that can be found in bone broth comes from the marrow and cartilage of the animal. These parts are very dense and it takes hours of boiling for bones to soften enough so that all that good stuff (e.g., key amino acids and essential minerals), can seep out into your broth.

If you don’t boil the bones long enough, you may have a hearty stock that will be good for stews and sauces, but it will not be filled with the multifaceted healing potential found in true bone broth.

Bone marrow, in particular, which is produced inside the hollow of the bones, is perhaps the most nutrient-dense component of all. Marrow contains many health-promoting substances such as collagen, linoleic acid, glucosamine, glycine, and proline.

These substances have been linked to lowering inflammation, helping with joint function, healing the gut, and promoting healthy skin and hair [1].

There is a catch to all this good news, however. The fatty marrow of the bones is precisely the location where major toxins tend to collect in conventionally raised animals.

The Reality of Commercial Meats and Toxins

The key component of making an effective, nutritious broth is to use bones that are 100% organic and come from grass-fed, free-range animals. Here are a few reasons why this part matters a lot.

In 2016, the World Health Organization’s International Agency for Research on Cancer supported the fact that the consumption of commercial meat is linked to a higher risk of cancer [2].

The main reason for the connection is that eating commercial meat (i.e., meat from animals fed commercial grains and raised in tight quarters), exposes consumers to unhealthy amounts of heavy metals, pesticides, unnecessary antibiotics and hormonal substances, and even GMOs.

Are There Antibiotics in Your Meat?

Unfortunately, the United States has some of the loosest regulations regarding commercial meat additives in the world.

Most of the antibiotics used in the agriculture industry come in the form of penicillin and the tetracyclines administered as antimicrobials to fight infections in unsanitary conditions and as hormonal agents to increase meat production [3].

According to a 2016 report put out by the U.S. Food and Drug Administration, 62% of all antibiotics sold in the U.S. are labeled as “medically important.”

Out of these antibiotics, 70% are sold to the meat production industry, mainly for cattle, poultry, and pork productions. In addition, during the six years between 2009 and 2015, “agri-pharma” antibiotic sales rose by 26% in general [4].

Stay Away From Ham Bones for Your Bone Broth

As a quick (but important) side note about meat types, keep in mind that it is very difficult for pork products, in general, to be completely free from toxins, especially antibiotics. This includes ham hocks and other boney parts of the swine that you may consider putting in your pot.

The reason being that the most animal-related pharmaceutical antibiotics go to the pork industry.

An investigative study of one of the top commercial pork operations in the world found an inconceivable number of pigs, close to half a million, living under a single roof. The animals were eating and defecating in the same place. Heavy antibiotic use is the only way that animals can survive such conditions without spreading major disease [8].

Agribusinesses also have the goal of fattening animals up as fast as possible, adding another incentive to administer even more drugs to swine.

Glyphosate in Food is a Growing Concern

Here’s yet another reason why organic matters. New research may be discovering the mechanisms through which the herbicide glyphosate (found in the common weed killer Roundup®) sprayed on grain crops used for animal feed may eventually make its way into the system of the actual animal… and thus eventually into you.

You may already know that bone broth contains large amounts of collagen, which is made of glycine as well as other health-promoting essential amino acids.

A 2015 investigation conducted at the Massachusetts Institute of Technology (MIT) found that glyphosate has the ability to disrupt specific pathways usually involved in glycine synthesis. Glyphosate basically takes the place of this amino acid in the body, acting as an “analogue” or mimic of glycine in the body [5].

Toxins in antibiotic residue, pesticides, and heavy metals tend to seep into fat molecules more than other areas of the body and this is true for animals as well as humans. This means that if a meat source contains toxins, it is going to be in the fattest areas, including the marrow [6].

Recent studies confirm that many meat toxins do wind up in bone broth. A 2017 report published in the journal Food and Nutrition Research found that bone broth soup made with commercial (non-organic) animal bones contained levels of mercury, cadmium, aluminum and lead that were high enough to raise concern [7].

GMO expert and food activist Jeffrey M. Smith, founder of the Institute for Responsible Technology, had this to say about glyphosate and bone broth in a 2019 interview with Organixx.

“If you’re doing bone broth and you’re taking bones from animals that have been fed largely Roundup Ready soy or corn or canola meal or cotton meal or alfalfa – these are the 6 main GMOs. All of them are basically Roundup Ready … So there’s a tremendous amount of Roundup going into the animal. Moving into the bone. Now you take those bones and then you boil it and it ends up in the water as it’s water-soluble and then you put it into a capsule. This is not something you want to do.”

Your Other Bone Broth Ingredients Should Also Be Organic

It’s important that the other components of your bone broth also stay as pure as possible for your health and safety. It goes without saying that all vegetables, vinegar, and spices you may want to put in your broth should be 100% organic.

The water you use as the base for your broth should be fresh, clean, and chemical-free. Many toxins do not dissipate through boiling and may even intensify when in steam or vapor form [9]. For this reason, always use fresh, filtered water that is free of fluoride, chlorine, and heavy metals for your broth.

What Type of Cooking Pot Are You Using?

Finally, take care to use a cooking pot that is free from heavy metals as well. The best type to cook bone broth in is a stainless steel soup pot. Other safe options are cast iron (if added iron is not a concern for you) or ceramic (such as for a crockpot).

Pressure cookers such as the InstantPot are also suitable if obtained from a company that tests for heavy metals and guarantees their products are toxin-free. Never use non-stick surface cookware or pots made of aluminum for making bone broth [10].

Be Safe as Well as Healthy With Bone Broth

Finally, don’t just assume that the bones at your local health food store or butcher are organic and toxin-free. Always ask about the origins of the bones you buy and/or contact the store’s meat provider directly to ensure the bones you’re using to make bone broth at home come from free-range, non-GMO fed livestock and that no antibiotics were used when raising the animals.

However you get your bone broth, just make sure it is safe as well as nutritious! Then you’re guaranteed to have a powerful supplement to put to good use in your health and healing toolbox.

[2] How to remove environmental pollutants from raw meat

[4] FDA: Antibiotic use in food animals continues to rise

[6] Carcinogenicity of consumption of red and processed meat: What about environmental contaminants?

[8] Boss Hog: The Dark Side of America’s Top Pork Producer 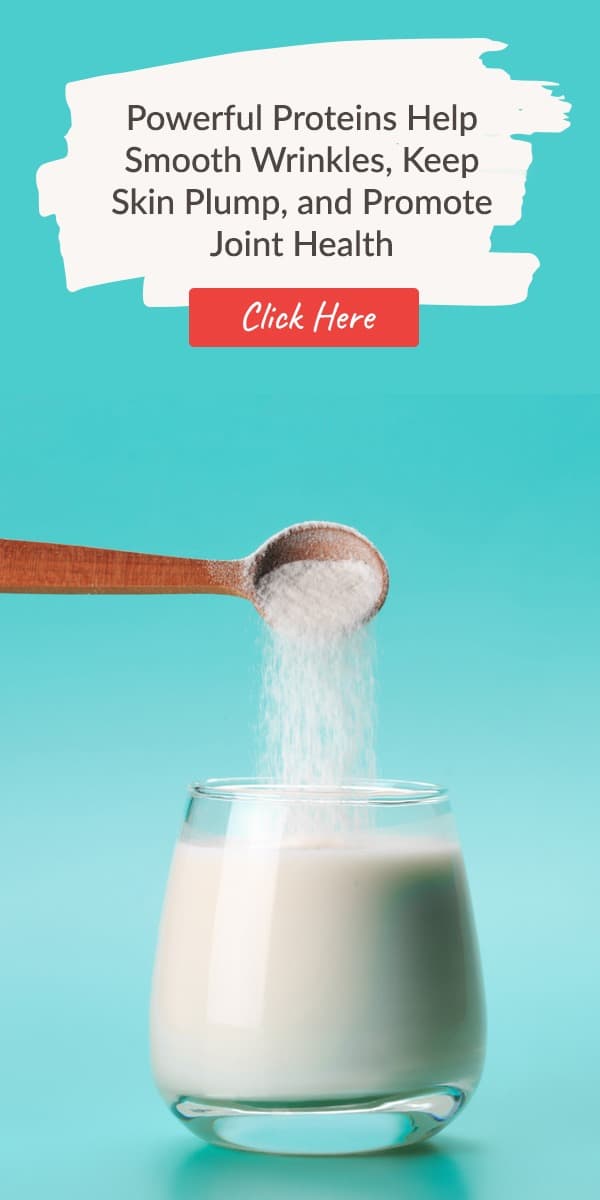