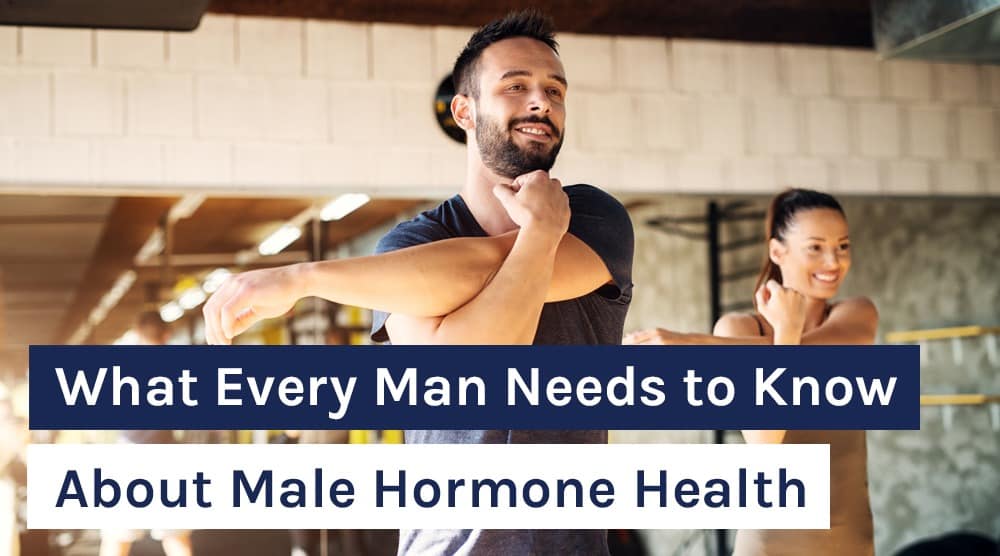 What Every Man Needs to Know About Male Hormone Health

Testosterone: it’s a hidden life force inside every man’s body that contributes to his masculinity. The premier male hormone associated with strength and virility, testosterone is what builds strong bones and big muscles. It’s responsible not only for generating sexual drive, but also a man’s “drive for life.”

Every man requires testosterone in sufficient quantities in order to live out his manhood to the fullest, differentiating him from a woman in terms of his physical, emotional, and cognitive attributes.

This vital male hormone is the essence of maleness, and something that every man’s body is naturally equipped to produce in adequate amounts… so long as he eats healthy, exercises regularly, and gets plenty of rest.

Oh, if only it were that simple! The unfortunate reality is that there are many things in the modern world that can directly interfere with male testosterone production – various “toxic” factors collectively known as hormone disruptors. Hormone disruptors come in many shapes and forms and are oftentimes unseen to the naked eye. This is what can make avoiding them somewhat of a challenge. Low testosterone can silently reduce a man from vibrancy to apathy, and from strength to weakness [1].

A man will know he’s likely encountered hormone disruptors when he starts to experience symptoms of low testosterone. He’ll feel less energetic, has a harder time thinking clearly, and begins to see his once rock-hard muscles turn to mush.

Even when it seems like a man is doing all the right things, hormone disruptors can quietly interfere with his biology and cause extensive damage. It can be a very jarring experience for affected men, who may wonder to themselves: what’s happening to me and how can I fix this?

The first step is identifying where male hormone disruptors typically lie in wait, in order to avoid them whenever possible. The second is to actively work to overcome their damaging effects as part of a holistic approach to healthy living.

What Are Male Hormone Disruptors?

A hormone disruptor is really any substance or influencing factor that interferes with the functionality of the endocrine system. The endocrine system is a network of glands inside the body that’s responsible for producing and balancing hormones [2]. Chemical pollutants represent one common example of endocrine disruptors.

Exogenous toxins (toxins coming from outside the body) often possess hormone-mimicking properties that, when a person is exposed to them, can have an estrogenic effect on the body. In other words, these external toxins act like female hormones in a man’s body.

How does testosterone affect masculinity? Watch this video to learn how what we put into our bodies may contribute to male hormone imbalance.

Hormone disruptors can also block natural male hormones from communicating with one another, greatly limiting their ability to perform necessary duties.

These duties include important bodily functions such as the regulation of metabolism, growth, development, detoxification, cell and tissue function, sexuality and reproduction, and mood. As it turns out, nearly every organ and cell in the body is governed by the endocrine system, which is why hormone disruptors are so destructive [3].

Synthetic Estrogens and Other Chemicals That Destroy Male Hormones

While both men and women require testosterone in order for their bodies to function correctly, men need much more of it than women do. Men’s bodies are designed to naturally produce more testosterone than women’s bodies, which is why exposure to environmental chemicals that damage its production or expression is particularly harmful for men.

Industrial compounds such as bisphenol-A (BPA), a xenoestrogen commonly used in plastic bottles, food can linings, and thermal paper receipts, can be a man’s worst nightmare.[Note: A xenoestrogen is a chemical that imitates estrogen in the body.]

These xenoestrogens often lurk inside product packaging, processed food, even tap water – a tasteless, odorless assault on masculinity. The good news is that synthetic estrogen compounds can be avoided if you know where they typically hide.

Hormone Disruptors in Your Home

In the home, hormone disruptors are often found in things like cleaning products, laundry detergents, hand soaps, wall paint, varnishes, and even furniture and carpeting.

Let’s take a closer look at 7 of the most common endocrine disruptors that impact male hormones:

These industrial byproducts are classified by the World Health Organization (WHO) as being persistent environmental pollutants (POPs) – meaning they don’t biodegrade very easily (if at all). Dioxins tend to accumulate in food, mainly in the fatty tissue of meat and dairy derived from animals exposed to herbicides, pesticides, and other chemicals [4]. Dioxins are also present in many laundry detergents, hand soaps, and cleaning products [5].

It’s pretty much an industry standard for manufacturers to apply flame-retardant chemicals to couches, chairs, mattresses, and carpeting to help offset their risk of flammability. But these chemicals, which include things like chlorinated tris (TDCPP) and polybrominated biphenyl ethers (PBDEs), are highly toxic and intensely hormone-disruptive [6].

These chemical preservatives are commonly found in shampoos, hand soaps, moisturizers, and other personal care products. They were widely thought to be safe until research emerged in the late 1990s to suggest that parabens, much like BPA, mimic the female hormone estrogen. This is why men should avoid like the plague any product that contains parabens [7].

Men, if you see the word “fragrance” on an ingredients list, put the product back and run! Synthetic scent chemicals can be found in everything from air fresheners and candles to dryer sheets and fabric softeners. There are thousands of them out there, many of which are a nightmare for a man’s hormones. The good news/bad news is they don’t have to labeled as anything other than “fragrance,” which in some ways actually makes them easier to spot and avoid.

It might be easier to prepare food with them, but non-stick cookware is another common source of hormone disruptors that should be avoided. PFCs and other chemicals in the coating material interfere not only with testosterone, but also estrogen and cortisol. These chemicals disrupt normal bodily function and potentially interfere with a man’s ability to reproduce [8].

These two compounds (the former being a now-banned chemical coolant and lubricant) are persistent in the environment and tend to accumulate in bottom-feeding fish, as well as in those that are farm-raised. Wild-caught fish, and especially smaller fish varieties, are a much safer alternative for men seeking to protect their hormones [9].

The active ingredient in Monsanto’s Roundup herbicide, glyphosate is the world’s most widely-used crop chemical. It’s routinely sprayed on genetically-modified corn, soy, and other non-organic crops, as well as on conventional wheat just before harvest. Residues of glyphosate, a proven hormone disruptor, often linger on these same food products after harvest, which is why men will want to stick with organic food whenever possible [10].

Why Men Should Never Consume Soy Speaking of soy, men will want to avoid this food, period, regardless of whether or not it’s organic. That’s because soy is loaded with phytoestrogenic (plant estrogen) compounds such as isoflavones that science has confirmed exhibit a powerful estrogenic effect inside the body.

Soy phytoestrogens are so powerful, in fact, that at least one study has cautioned that infant consumption of soy-based formulas is comparable to taking three to five birth control pills every single day [11]! They may even be more damaging than the aforementioned chemical toxins [12].

Adults can suffer from exposure to soy as well, as soy isoflavones and other phytoestrogenic compounds in soy have been shown to directly inhibit male hormones. Their influence on sexual development and reproduction, neurobehavioral development, and functionality of both the thyroid gland and immune system led researchers publishing a paper in the journal Pediatrics to declare that phytoestrogens like the kind found in soy “are of particular interest in human health [13].”

Isoflavones and other phytoestrogens are also present in many other types of legumes (beans), and well as in many other foods in general. These foods include (but aren’t limited to):

There are two more major killers when it comes to testosterone: sugar and stress. The two often go hand in hand, as a stressful lifestyle can drive men to binge eat for comfort.

Binge eating usually involves junk foods that are high in refined sugars and processed grains, the latter of which essentially turn into sugar as well once they’re metabolized. This can send blood sugar levels soaring, resulting in a corresponding plunge in testosterone – not to mention the damage it does to insulin sensitivity.

Research suggests that intaking 75 grams of pure glucose – which is easy to do with a few cans of soda pop or a slice of pie after a fast food meal – is enough to send testosterone levels into the depths.

Men who eat like this are at high risk of developing type-2 diabetes and other illnesses associated with metabolic syndrome, which in and of itself is indicative of severe hormone imbalance [15].

Then there’s stress, which all by itself wreaks absolute havoc on testosterone production and stores. We’re talking about chronic stress that causes the adrenal glands to have to pump out a constant stream of cortisol. This cortisol directly suppresses testosterone both in the hypothalamus and the testicles. Also known as the “stress hormone,” cortisol competes with testosterone for cholesterol – and it usually wins, leaving inadequate stores for testosterone biosynthesis.

Not only that, but excess cortisol production can deplete the adrenal glands of their ability to produce hormones period, resulting in a condition commonly referred to as adrenal fatigue. Adrenal fatigue can create a negative feedback loop in which a man no longer feels the vigor and strength he once did. This causes him to stress out even more, lose sleep, eat junk food, and ultimately plunge into an even worse anabolic position than when he started.

It’s a situation that no man wants to find himself in, which is why it’s important to take the proper steps to help mitigate stress and rejuvenate your mental and physical state.

This typically involves moving your body regularly, getting at least 6-8 hours of sleep every night (and even taking naps during the day if need be), and taking action to eat right no matter how busy you might be.

De-stressing may further include downsizing, decreasing your responsibilities, and even supplementing with adaptogenic herbs to help support a normalized, homeostatic state of mind, body, and soul.

[1] What is Endocrine Disruption?

[2] What Is a “Hormone Disruptor” Anyway?

[4] Dioxins and their effects on human health

[5] Are You Poisoning Your Household With this Chore?

[9] Mercury and PCBs in fish

[11] The Potential Adverse Effects of Soybean Phytoestrogens in Infant Feeding

[13] Use of Soy Protein-Based Formulas in Infant Feeding

[14] Legumes and soybeans: overview of their nutritional profiles and health effects