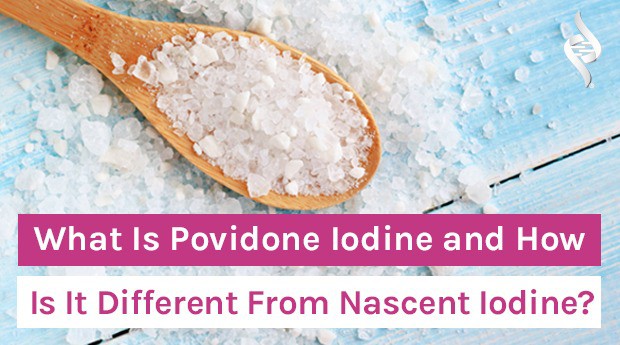 What Is Povidone Iodine and How Is It Different From Nascent Iodine?

You probably know that iodine is a must-have for hormonal health and the health of your entire body. But you may still be confused about the different types of iodine and what they can do. To help you determine the best type of iodine supplement for your needs, let’s dive into two common types of iodine – povidone iodine and nascent iodine – and discuss the difference between them.

What Is Povidone Iodine Solution?

Remember that bright yellowish-brown stuff your mom or the school nurse used to slather on your arm or knee whenever you got a cut? It stained your skin for days but putting the “yellow stuff” on prevented you from getting an infection! That’s because povidone iodine is effective at killing a wide range of harmful and pathogenic microorganisms.

It is different than iodine tincture, often called weak iodine solution, though. Although both are used as antiseptics, povidone iodine does not contain alcohol as tincture of iodine does.

Sometimes individuals will choose to use tincture of iodine instead of povidone iodine when time is of the essence because the alcohol in it makes the solution dry quickly. It is also used for sanitation. In most other commercial settings, however, povidone iodine is used.

Povidone iodine is one of the oldest man-made antiseptics for the skin and has been around since the mid-1950s. It is also used in some shampoos, vegetable washes, soaps, dyes, and some eyewashes. It is commonly used as a disinfectant by surgeons to prevent infections and as an antibacterial by dentists [2].

Povidone iodine is always used externally (never ingested) and is made up mostly of iodine and povidone. Povidone is a synthetic, highly dissolvable substance used to transport and carry other medicinals. A container of povidone iodine usually contains about 10% iodine and 90% povidone.

You can get topical povidone iodine solution at most drug stores and pharmacies. Povidone iodine is tolerated by most people, although side effects do exist for some individuals and in some cases. Certain people may be allergic to povidone iodine and can develop a rash or experience other side effects. Also, according to studies, using povidone iodine in large quantities can result in kidney issues, high serum blood sugar levels, and other serious side effects [3].

Some Povidone Iodine Will be Absorbed Through the Skin

Of course, povidone iodine is still iodine and your skin is one of your biggest organs. The iodine in povidone iodine will absorb into your bloodstream to some extent. This is something to keep in mind for people who have been advised by their doctor not to ingest iodine or pregnant women [4].

How is Povidone Iodine Different From Nascent Iodine?

While povidone iodine is used externally only, nascent iodine can be used both externally and internally. It is sometimes called monatomic, atomic iodine, or just simply “atomidine.” According to many experts, it is also the best form of iodine supplement out there today.

You may have heard of potassium iodide or iodine obtained from kelp or from other sources. Unlike these products, nascent iodine does not need a carrier mineral. Thus it does not require extra energy from the body to be “converted” into a useable substance.

“Nascent” means “coming into being.” This form of iodine is incomplete at the atomic level (and thus waiting to “come into being”), but this is by no means is a bad thing. It simply means that it contains an odd number of electrons and carries an electromagnetic charge.

So what does all this translate to for your health? Simply put, nascent iodine is many times more absorbable than other kinds of iodine. It works quickly in the body but is also safe and requires less energy to do its job. When it comes to the thyroid and endocrine health, taking nascent iodine as an internal supplement can help your endocrine system stay in more consistent balance. This is beneficial for your hormones as well!

Nascent Iodine Has Been in Use Longer Than Povidone Iodine

Another difference between nascent and povidone iodine is that the nascent form of iodine has actually been around a lot longer. It was the “go-to” form of pre and post-surgery antiseptic iodine used by surgeons from when it was first developed in the 1920s until the reign of pharmaceutical companies began in earnest a few decades later.

Nascent iodine can still be used in all the external ways that povidone iodine and tincture of iodine can be used. Because it is not made using synthetic substances and manufacturing practices and does not contain alcohol, nascent iodine is less likely to cause a reaction.

When used internally, it can be both safe and extremely effective at:

Experts also claim that it contains chelating properties and is able to remove both heavy metals and toxic halides such as chlorine, fluoride, and bromide from the body [6].

When choosing an iodine supplement why not choose an “all-in-one” that is safe, effective and fast working for your health? Add Organixx all-organic, cleanly produced nascent iodine supplement to your toolbox for both internal and external use… and you will be well-prepared for whatever cut, scrape, or health challenge comes your way!

[2] Difference Between Povidone Iodine and Iodine

[3] Povidone-iodine: Safe Use of a Common Antiseptic

[5] Iodine status and its correlations with age, blood pressure, and thyroid volume in South Indian women above 35 years of age (Amrita Thyroid Survey)