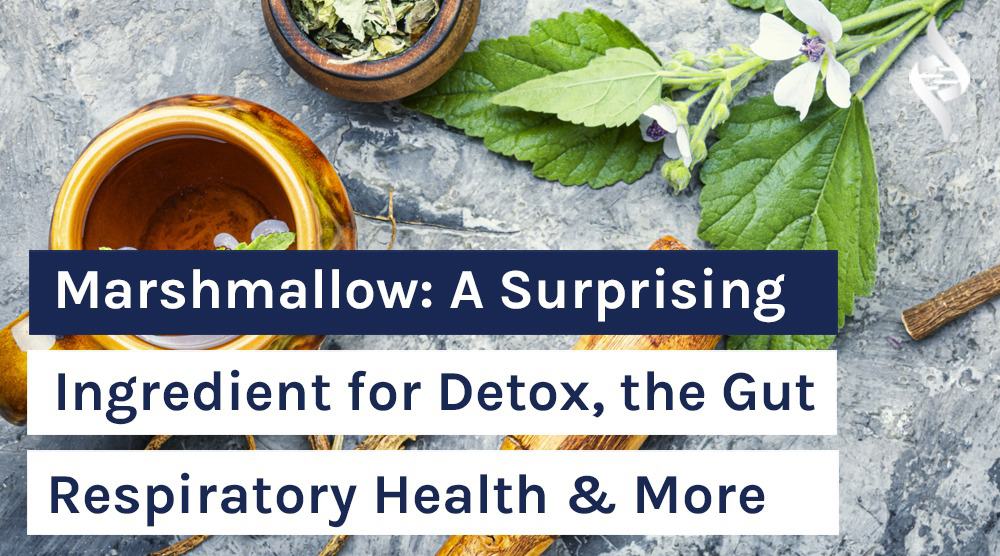 When you hear the word “marshmallow” you likely think of the sweet, fluffy concoction popular around campfires and used as a filling for candied yam casseroles at Thanksgiving. But in this article, we’re focusing on the benefits of the marshmallow plant (aka Althea officinalis or Althaea plant). This mucilage-producing perennial has provided powerful relief for digestive distress, respiratory infections, chronic inflammation, and more for hundreds (if not thousands) of years.

Marshmallow Plant vs Marshmallows (the sugary treat): What’s the Difference?

Indeed, there was once a connection between the marshmallow plant and the confectionery. In antiquity, the squishy, sugary marshmallow was made from marshmallow plant root and honey. It was a treat that was consumed sparingly, and supposedly only by the upper class in Europe. It was also used as an effective throat soother, akin to our modern-day “cough drops.”

Nowadays, the gooey, puff-pillow variety of marshmallows we get at the grocery store is mostly developed in a lab with high fructose corn syrup and other ingredients that are too long to pronounce. In contrast, the marshmallow plant was created by Mother Nature and possesses a wide variety of medicinal qualities.

The Althaea plant was first possibly cultivated by the ancient Egyptians and came into its own in Greece. Its popularity as a food source and medicinal eventually expanded to include Rome, where marshmallow leaves were enjoyed as a delicacy. Eventually, marshmallow was eaten and used medicinally across all of Europe.

Marshmallow plants tend to prefer wet, marshy environments. However, like all mallow plants, they’re a relatively hardy variety that’s flexible in terms of where it can take root. All mallows are related to the hibiscus flower as well as cotton and okra.

It’s not uncommon to see marshmallow plants and other mallows growing along fence lines, in abandoned fields, in sidewalk cracks, and even popping up as a weed in your neighbors’ (or maybe even your own) lawn.

Before we zero in on some exciting and specific conditions and situations that marshmallow can help with, here’s a brief overview of multiple medicinal uses that Althea officinalis is known for:

Looking at this list, it’s easy to see why the ancient Greeks and Romans considered Althaea plant an all-around healing tonic!

Marshmallow Leaves Are Excellent in Salads

As an aside, marshmallow leaves are also a delightful addition to salads, as they contain many essential minerals such as iron, sodium, zinc, vitamin B, iodine, pantothenic acid, and more.

Experiment with the raw leaves and trade your ordinary salad greens like romaine or arugula for marshmallow leaves if you ever get the chance. You’ll be surprised by their refreshing, slightly sweet, nutty flavor.

Marshmallow Helps Your Body Detoxify in More Ways Than One

Marshmallow’s healing and detoxifying power for the gut, for the respiratory tract, and other areas of the body, in large part has to do with particular substances within both the root and leaf which have a soothing effect on the body’s inner pathways.

The roots of the marshmallow plant especially contain mucilage, which is a naturally gummy substance that doesn’t dissolve in water. When mucilage is released in the body, wherever it lands it will do its job of soothing, healing, and ultimately relaxing the tissues – whether that’s the inner tissues of the colon and stomach or the throat, esophagus, and lungs.

Inflammatory reactions are, in reality, part of the way in which the body rids itself of toxins. When tissues stay irritated and inflamed for longer than is healthy to do the job, however, is when chronic inflammation occurs.

This state can have the opposite effect than what the body was originally intending and can actually produce an environment that invites more infection, pathogens, and, ultimately, disease [1].

The end result is that the body can relax and begin to flush out toxins naturally. This occurs wherever toxins need to be released, whether this is in the form of:

According to a 2007 study conducted at Comenius University in Slovakia in Eastern Europe, extracted polysaccharides from the Althaea officinalis leaf proved to be a stronger “antitussive” (cough suppressing) agent than most common drugs routinely given for cough or obtained over the counter [2].

Furthermore, a 2017 report in the Journal of Natural Products found that extracts of marshmallow contained substances that inhibited the enzymatic growth of Escherichia coli (E. coli). The researchers from the 2017 study deducted that this element alone was a significant reason why marshmallow extract may have such a profound effect against respiratory conditions such as bronchitis.

Another way that certain plants and herbs can help with detoxifying and healing the body is through what it can do for the gut. The connection isn’t always clear, but recent research has clearly spelled out the direct link between a healthy balance of microbiota within the gut and the overall health of the liver, in particular. One way that new research is making this connection is by focusing on what is called the “gut-liver-brain axis [3].”

Here’s one way of thinking about this connection: if, for whatever reason, your digestive system cannot break down and assimilate all the nutrients from food that it needs, one of the results will be an overabundance of “foreign particulars” in your system as a whole.

This is part of what’s known as “leaky gut” (aka intestinal permeability) and is also a factor for higher risk for chronic inflammation, autoimmune, a higher toxic load, and disease in general [4].

Consider Marshmallow for Helping Your Organs of Detoxification & Gut-Healing Routine

Marshmallow is currently listed on the British Herbal Compendium for use in helping with gastroenteritis, peptic and duodenal ulcers, enteritis, and colitis [5].

A 2015 study conducted by researchers at the Lorestan University of Medical Sciences in Iran found that “herbal extract of officinalis L. can be a great candidate for the treatment of gram-positive infections and merits further studies [6].”

A comprehensive review of Althaea plant conducted in 2017 emphasized not only the antimicrobial, gut-healing, and respiratory system soothing effects of the plant, but its immunomodulatory (regulating immune function) and anti-inflammatory characteristics as well [7].

These recent findings (and more) conclude that there are literally dozens of ways that the marshmallow plant can be your ally for general health, and for supporting your body’s natural detoxification system, in particular.

[1] Inflammation as "common soil" of the multifactorial diseases.

[6] Evaluation of the antibacterial activity of the Althaea officinalis L. leaf extract and its wound healing potency in the rat model of excision wound creation.

[7] The Pharmaceutical importance of Althaea officinalis and Althaea rosea: A review