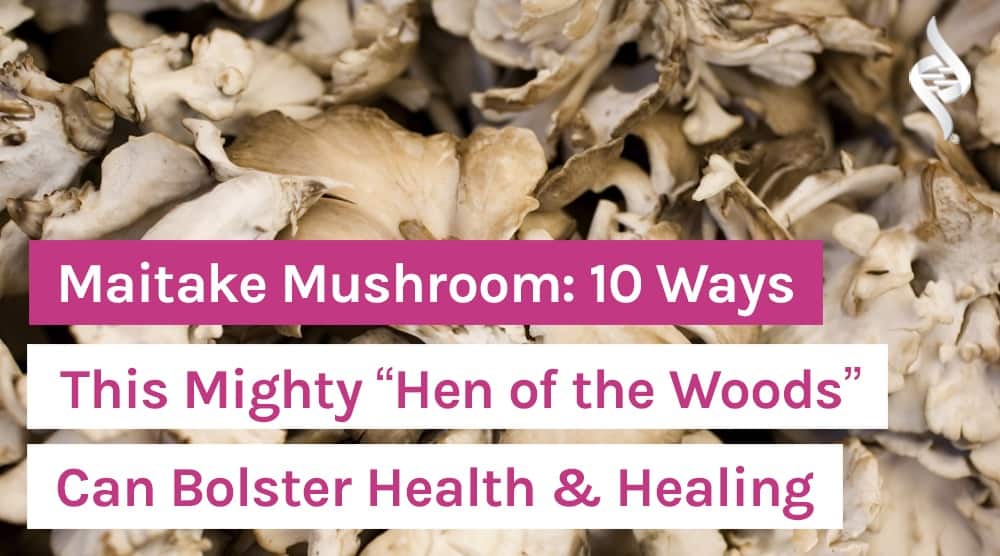 Maitake Mushroom: 10 Ways This Mighty “Hen of the Woods” Can Bolster Health & Healing

Have you ever heard of a dancing mushroom? Neither have we. But there is a type of mushroom that, according to legend, is said to have made anyone who found it dance with happiness. In fact, its name in Japanese means “dancing mushroom.” So prized is this mushroom that mushroom hunters would keep their locations a well-guarded secret. We’re speaking of the amazing maitake mushroom, also known as Grifola frondosa, hen of the woods mushroom (hen-of-the-woods), ram’s head, and sheep’s head.

What makes this edible and medicinal mushroom such a treasure both past and present? Read on to discover what scientific research has uncovered about maitake mushroom benefits.

Maitake doesn’t look like a regular mushroom in that it doesn’t have the typical cap and gills of the mushrooms you usually see in the grocery store. It’s what is known as a polypore or bracket mushroom.

Grifola frondosa has multiple branching stems and a flowery, ruffled cap which is why one of its common names is hen-of-the words. To some, it resembles the ruffled feathers of a brown hen. Believe it or not, maitake can actually grow much bigger than a hen. It’s a huge mushroom that often reaches 20 inches (50 cm) in diameter and can weigh up to 100 pounds (45 kg) per specimen!

Where Do Maitake Mushrooms Grow?

Grifola frondosa like to grow on the stumps of dead or dying hardwood trees like maple, oak, elm, and beech and are found in cooler climate forests in the northeastern United States, Canada, Europe, China, and Japan.

In North America, they can be found in the wild generally between late August and late November.

What’s in Grifola Frondosa That Makes Them Beneficial?

Maitake mushrooms are rich in a variety of nutrients but it is their polysaccharide (meaning “many sugars”), content that makes them special. They have been utilized for centuries both for food and medicine in Asia and in North America.

Polysaccharides are compounds with a chain of sugar molecules bound with protein. D-fraction consists of two types:

D-fraction has been widely researched and found to have a number of health benefits [1].

Inflammation is inextricably linked with many human health conditions, including arthritis (in fact, any condition ending in “itis”), inflammatory bowel disease, and even cancer.

A 2002 study [2] found that fatty acids isolated from maitake had antioxidant and anti-inflammatory properties. These acids acted to block an enzyme known as cyclooxygenase (COX) which is known to promote inflammation in the body.

A 2010 study [3] found that maitake eased the inflammation associated with inflammatory bowel disease by suppressing the production and activity of a cytokine (immune signaling molecule) known as TNF-alpha.

Many studies have demonstrated maitake to have complex actions on the immune system [4].

A small 2003 clinical study [5] found that maitake’s D-fraction activated CD4 and CD8 cells (important components of the immune system) in cancer patients. D-fraction also slowed the spread of cancer, inhibited the expression of tumor markers, and increased natural killer cell activity in all of the patients in the trial.

Researchers investigated the effects of D-fraction on mice infected with pathogenic bacteria known as Listeria monocytogenes [6]. Some of the mice were given D-fraction along with vancomycin, an antibiotic drug, while the other mice received no treatment.

Researchers found that the immune cells in the mice receiving the D-fraction produced more than twice the amount of anti-bacterial activity than the non-treated mice.

A small clinical trial involving 34 breast cancer patients reported in 2009 [7] found that maitake administration had beneficial immunomodulatory effects. This means that it increased the activity of some aspects of the immune system while inhibiting others.

In a 2015 study [8], maitake was given to patients with myelodysplastic syndrome (MDS), a type of cancer that often progresses to acute myeloid leukemia (AML). The patients tolerated maitake well, and it enhanced the function of immune cells known as neutrophils and monocytes. As a result of this study, researchers stated “Maitake has beneficial immunomodulatory potential in MDS.”

A 2008 animal study [9] investigated the ability of maitake D-fraction to inhibit the spread of cancer cells, a process known as metastasis. Researchers found that D-fraction inhibited tumor metastasis by activating natural killer cells and antigen presenting cells (components of the immune system), and by suppressing a gene associated with promoting tumor cell adhesion to cells located inside blood vessel walls.

A 2019 cell study [11] found that a combination of polysaccharides from maitake and turkey tail mushrooms had potent cytotoxic (cancer cell killing) activity against colon cancer cells.

The combination inhibited the rapid growth of the cancer cells, inhibited the expression of oncogenes (genes implicated in the cancer process), and inhibited the ability of the cells to move through the body and metastasize. When maitake was combined with a commonly used chemotherapy drug, 5-fluorouracil, its cancer cell killing power was improved.

In animal studies, maitake D-fraction has shown an ability to regulate blood lipids and blood glucose levels, improve the metabolism of fats, inhibit atherosclerotic plaques in blood vessels, and assist with weight loss. Combined, this equates with improved cardiovascular and overall health [1].

One patient had complete glycemic control with maitake SX-fraction and was free of medications as of the study release date, while others showed more than 30% decline in their blood glucose levels after taking maitake for only two to four weeks.

Maitake has also shown some interesting benefits for brain health. A 2016 animal study [18] found that beta-glucans from maitake had anti-depressant effects, which lingered several days after ingestion.

Maitake has long been studied for its anti-viral properties. Maitake appears to work against viruses in several ways, including directly inhibiting the virus, stimulating the body’s immune system to fight against the virus, and protecting against opportunistic infections.

Several studies have found that maitake polysaccharides were able to inhibit Human Immunodeficiency Virus (HIV, the virus that can lead to Acquired Immune Deficiency Syndrome or AIDS). They also found that maitake promoted the body’s ability to fight off the virus, improved the body’s ability to resist HIV recurrence, and improved quality of life in patients with HIV [20, 21].

Maitake works well against other viruses as well. Various studies have found that maitake was beneficial for influenza sufferers and had inhibitory effects against the virus that’s responsible for cold sores (Herpes Simplex I, or HSV-1) and chronic hepatitis B virus (HBV) [1, 22].

It has been said that nothing knows how to better handle a fungus than a fungus. And that does indeed appear to be the case because maitake is a potent weapon against fungal infections; even difficult-to-eradicate conditions like vaginal thrush (caused by an opportunistic fungus known as Candida albicans) [21, 23].

Protection against contamination from radiation has been a hot topic worldwide, particularly after the Fukushima Daiichi nuclear disaster in 2011. It’s also important for patients receiving radiation therapy for the treatment of cancer.

Utilizing natural therapies that help to protect from the damaging effects of radiotherapy, while not interfering with its action, is wise. Several studies have found that maitake polysaccharides conferred a radioprotective action.

They do this by promoting the recovery of white blood cells in the immune system, improving the function of immune cells, and protecting cellular DNA, all of which helps to protect against radiation-induced injury [1].

Mercury contamination is a global problem, with mercury increasingly found in our oceans, fish, and environment.

Once mercury enters the body, it is distributed throughout but accumulates in the liver, brain, and kidneys. A 2018 study [24] appearing in Scientific Reports found that maitake mushrooms help to clear mercury out of the body.

Rats were used for the experiment and it was found that maitake accelerated the decrease of mercury in the blood, decreasing it by 50% on the second day of treatment.

Maitake polysaccharides also promoted the elimination of mercury from the liver and kidneys, which helped to prevent progressive increases in blood mercury levels and kept them within a relatively stable range.

It is clear that almost everyone can benefit from this special healing mushroom. You can and should include them in your cooking, but the best way to obtain their potent healing properties is through supplementation.

[1] Grifola Frondosa Polysaccharide: A Review of Antitumor and Other Biological Activity Studies in China

[12] B-glucans from Grifola frondosa and Ganoderma lucidum in Breast Cancer: an Example of Complementary and Integrative Medicine

[13] Anti-diabetic Activity Present in the Fruit Body of Grifola frondosa (Maitake). I.

[21] Maitake Extracts and Their Therapeutic Potential – A Review

[22] Isolation, Identification and Function of a Novel Anti-hsv-1 Protein from Grifola frondosa