Can Turkey Tail Mushrooms Aid in the Fight Against Cancer?

Brewed for thousands of years as a healing tea in China, the Chinese medicinal turkey tail mushroom – known scientifically as Trametes versicolor or Coriolus versicolor – shows great promise as a major boon for cancer patients.

Emerging evidence shows that this multi-colored fungus, which grows widely in forests around the world, can help to protect cancer patients.

It has been shown to work in two ways:

Back in 1976, a Japanese company had already patented certain extracts of Coriolus versicolor under the name PSK and later PSP, which have since become recognized anti-cancer drugs in Japan.

Multiple studies and clinical trials have confirmed that PSP blocks cancer cell growth along with reducing treatment-related side effects such as fatigue, loss of appetite, nausea, vomiting, and pain. PSP can also restore weakened immune systems in cancer patients.

In a 2012 clinical trial funded by the National Institutes of Health (NIH), turkey tail mushroom extract was seen to restore the impaired immune systems of breast cancer patients after they had finished radiation therapy.

Recently, the U.S. Food and Drug Administration (FDA) has approved a clinical trial allowing patients with advanced prostate cancer to take turkey tail extract along with conventional chemotherapy to assess the benefits of this combination.

Similarly, another clinical trial will test the effects of taking the extract along with a vaccine treatment in women with breast cancer.

As stated already, an extract or extracts of Coriolus versicolor (aka Trametes versicolor) have been patented in Japan under the name Polysaccharide K, also known as PSK or Krestin. PSK is widely used in Japan as a complementary immunotherapy for treating many cancers, including lung cancer.

A systematic review of PSK’s safety and efficacy in lung cancer treatment was carried out in 2015, in which 28 studies were included for review and analysis.

Fifteen of 17 studies confirmed that PSK had anti-cancer effects by directly inhibiting tumors leading to less cancer growth and anti-metastatic effects, as well as via immunomodulation and boosting immune system activity. Metastasis is the ability of cancer cells to leave the area of the body they originally grew in and move to another area, starting a new tumor or multiple new tumors.

This review showed that both median survival and survival after 1, 2, and 5 years were noticeably better after PSK treatment. Immune parameters, blood function, body weight, and tumor-related symptoms such as fatigue and anorexia were all improved in lung cancer patients treated with PSK. 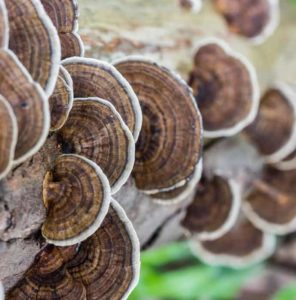 Researchers at the University of Minnesota Medical School and Bastyr University Research Institute wondered whether Coriolus versicolor extract could be used to restore the immune system and improve the health of women with breast cancer after they had undergone radiation therapy.

The study they published in 2012 shows that turkey tail mushroom extract can successfully complement conventional radiotherapy by increasing the activity of natural killer cells and “cytotoxic T-cells” – which likely attack and kill off any remaining cancerous cells.

Natural killer (NK) cells are specialized immune cells that can recognize and bind to certain tumor cells and virus-infected cells and kill them. Similarly, cytotoxic T-cells are a type of white blood cell that kills cancer cells, cells that are infected (especially with viruses), or cells that are damaged in other ways.

In this study, nine women with breast cancer were given either 3, 6, or 9 grams of turkey tail mushroom extract over a period of 4 weeks and their immune data was measured before and after radiation therapy.

This extract was reasonably well tolerated by these women. Their immune data showed that both their lymphocyte counts and functional activity of natural killer cells increased at daily doses of 6 and 9 grams. Further, the higher the dose, the greater the number of cytotoxic T-cells patrolling in their blood looking for cancer cells to kill.

This study showed that Coriolus versicolor extract is safe to give to women with breast cancer and that it can restore their impaired immune system after standard radiotherapy.

There are many examples of the effectiveness of Trametes versicolor extract in various models of cancer:

Turkey tail mushroom has a long-standing therapeutic use in traditional Chinese medicine. In recent times, various scientific studies have demonstrated that extracts of turkey tail mushroom (and reishi mushroom) help prevent the formation and growth of many different types of cancers. Additionally, they reduce treatment-related side effects and restore weakened immune systems in cancer patients who have been subjected to chemotherapy and radiation therapy.

In vivo and in vitro anti-tumor and anti-metastasis effects of Coriolus versicolor aqueous extract on mouse mammary 4T1 carcinoma.