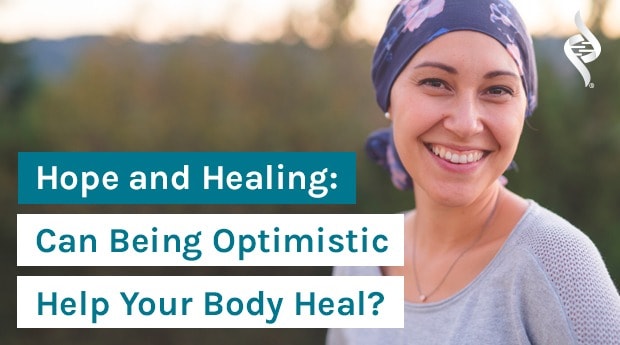 Hope and Healing: Can Being Optimistic Help Your Body Heal?

So, what does this have to do with hope and healing? Aren’t these automatic processes; things we don’t even need to think about? Well, yes, but there is a lot more to it than that. The emerging sciences of epigenetics and psychoneuroimmunology amply demonstrate that we can directly influence the inner workings of our body… with our minds, our moods, and our thoughts.

Your Cells Seek Either Growth or Protection

In his book, “The Biology of Belief” (the 2006 Best Science Book of the Year [1]), cell biologist Bruce Lipton describes some fascinating findings with cells he was studying.

rd nutrients introduced into the culture dish, just as a hungry person would gravitate toward life-sustaining food.

Dr. Lipton discovered that cells cannot simultaneously move forward and backward. In other words, they cannot support growth and protection at the same time.

Does Being Negative Lead to Poor Health?

Your beliefs and expectations, the foundation upon which hope is built, trigger the release of very particular neurotransmitters. Neuroscientists believe that hope and optimism are not just mental states. They have body-wide electrochemical connections that play a large part in the inner working of your body.

Study after study indicates that those who tend toward pessimism and negativity have increased pain, higher levels of inflammation, more anxiety and depression, and poorer health outcomes than those who are hopeful and optimistic.

Six Months to Live vs. A Strong Message of Hope

Have you ever heard a story about an oncologist telling a cancer patient that they had six months to live, and sure enough, six months almost to the day, that patient passes away?

What if that patient never received that pronouncement? What if they had received a strong message of hope instead?

Psychoneuroimmunology (“PNI”) is the study of the connection between the brain, the endocrine system, and the immune system. Dr. Candace Pert (1946-2013), considered by many to be the ”mother” of PNI, was involved in a multitude of studies on peptides beginning in the 1970s that led to the understanding that the brain and the body are not separate entities.

Our beliefs, hopes, experiences and expectations shape not only our perceived realities, but also our physical condition.

Hope = Vital Energy in the Body

Hope appears to act as a form of vital energy that interacts with body functions and produces very real and quantifiable physical changes. It seems that our brains need hope in order to properly function, and our bodies are just as reliant on it.

For instance, studies have shown that negative states of mind weaken the immune system [3]. On the other hand, hopefulness changes the brain by (among other things) triggering neurotransmitters called endorphins and enkephalins to be released. These chemical messengers help to block pain and accelerate healing. This is just one instance of the body-mind connection.

Knowing this, how can doctors continue to give their patients hopeless death pronouncements rather than a strong message of hope?

A 1991 study [4] on hope defined it as a state of positive motivation based on three components:

But many would also view hope as a much less scientific or goal-oriented state of mind. Emily Dickinson, 19th century poet and writer, put it beautifully: “Hope is the thing with feathers that perches in the soul, and sings the tunes without the words, and never stops at all.”

The Science of Epigenetics and Hope

A relative late-comer in science is epigenetics, which literally means above (or on top of) genetics. The old view of genetics, as put forth by Francis Crick and James Watson in 1953, stated that genes are self-actualising. That they have the ability to turn themselves on and off.

What scientists eventually came to realize, however, is that there is no such thing as an on/off function for genes. Genes are blueprints to make proteins which are the building blocks that give rise to a particular cell or structure.

The original view, which was never proven but merely a hypothesis, led to the notion that we are victims of our biology. The shift away from this belief has had an enormous effect on the way we view genetics and health.

Epigenetics shows us that we are actually masters of our biology, rather than slaves, and that we have enormous, influential power.

As previously mentioned, one of the things that can hugely influence our genes is our state of mind. Dr. Bruce Lipton states that “Our positive and negative beliefs not only impact our health, but also every aspect of our life.

Our Beliefs Control Our Biology

Dr. Lipton shares that our beliefs control our biology, and that our biology adapts to those beliefs. He explains…

“When we truly recognize that our beliefs are that powerful, we hold the key to freedom. While we cannot readily change the codes of our genetic blueprints, we can change our minds. You can choose what to see. You can filter your life with rose-colored beliefs that will help your body grow, or you can use a dark filter that turns everything black and makes your body/mind more susceptible to disease.

Hope Is Different for Everyone

But what stimulates the hope that can sometimes lie dormant within us?

There is no easy answer to that, because each of us is completely unique. What might make one person feel hopeful might drive another to utter despair. We all have a unique perspective and history which combine to create who we are and how we think.

But knowledge is powerful… just knowing that we have the ability to influence an outcome with our own brain can be strong medicine.

The Placebo Effect Demonstrates the Power of the Mind

It has been established that one third of all medical healing is derived from what is known as “the placebo effect,” as opposed to direct medical intervention.

One example of the placebo effect is when someone has an illness and is prescribed a sugar pill and believes that it is a potent drug created to cure the condition. One third of the time, the placebo will heal the condition. Such is the power of our minds to heal us.

How can a pessimist turn themselves into an optimist? For those who have tried the power of positive thinking and failed, it’s often not as easy as it sounds.

Dr. Lipton advises that it can be difficult to simply change our minds and create long-lasting change just by choosing to be more positive. Many other inspirational gurus would agree with that. The reason for this, Lipton states, is that our subconscious minds really run the show. As Lipton says:

“When it comes to processing information the subconscious mind is over a million times more powerful than the conscious mind [7].”

In fact, neuroscientists have found that the conscious mind only operates about five percent of a person’s day, and that 95 percent of the time the subconscious mind is actively directing what you think, how you behave, your beliefs and actions.

Many Beliefs Are Formed in Childhood

If lasting change is to be made, we must address and overcome any negative programming received during

formative years from our parents, family members, friends, and mentors, and tackle those subconscious beliefs that may be hindering us.

Did you ever hear statements like these (either directed at you by others or by yourself)?

These kinds of statements are just a few examples of negative programming, and not surprisingly can lead to a fair amount of pessimism and hopelessness. It can take a good deal of effort to reprogram the subconscious mind to eject these statements from your consciousness, but it is well worth pursuing.

7 Tips for Lighting the Spark of Hope

Here are 7 tips for overcoming negative programming and recovering (or creating) a sense of hope:

[1] The Biology of Belief: Unleashing the Power of Consciousness, Matter and Miracles

[3] Alterations in immunocompetence during stress, bereavement, and depression: focus on neuroendocrine regulation.

[4] The will and the ways: development and validation of an individual-differences measure of hope.

[5] The Biology of Belief: Unleashing the Power of Consciousness, Matter and Miracles