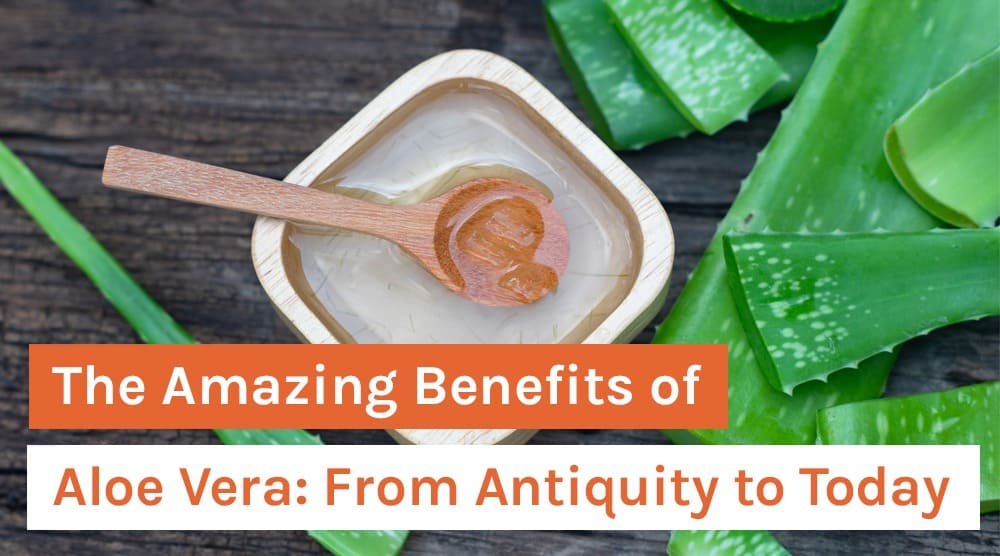 The Amazing Benefits of Aloe Vera: From Antiquity to Today

The succulent perennial Aloe vera, of the Aloaceae family, has a tremendously long history as a healing plant and there is an extensive list of recorded benefits of Aloe vera. There is also a growing body of research into aloe’s modern day potential health benefits.

Indigenous to Eastern and Southern Africa, records of Aloe vera’s use date back as far as 1750 BC. Ayurvedic medicine (Ayurveda is the ancient healing system of India) has long revered aloe, and there is rumor that Cleopatra’s soft skin was due to aloe.

Aloe is also reputed to be the reason Alexander the Great sought to conquer Madagascar – he wanted to acquire the abundant Aloe vera plants for treating the wounds of his soldiers. Even the ancient Greeks are on record as using this healing plant [1]. According to a study published in the Indian Journal of Dermatology, Aloe vera has also been used for hundreds of years in China, Mexico, and Japan [2].

Nowadays Aloe vera grows around the world, usually in hotter climates, such as the Caribbean, some Southern states, as well as Central and South America. You may know aloe as a common house plant, or even keep one on hand yourself for minor burns and other skin irritations. Indeed it is for this purpose that Aloe vera is most well-known in the Western world.

Aloe vera’s strong reputation in the West as a burn remedy began in the mid 1930s when a woman undergoing x-ray treatments developed severe dermatitis that would not go away. Aloe healed this chronic condition, which instigated informal trials on patients with radiation burns.

Then in 1953, a study on rats by Lushbaugh and Hale noted results that were supported by science, rather than mainly anecdotal observations [3].

More recently in a review of four studies, when compared to conventional treatments, Aloe vera was noted to reduce the healing time of topical burn by approximately nine days [4].

Aloe Vera Benefits: Much More than Just a Home Remedy for Burns

If you’ve personally ever applied aloe to a sunburn, you know the cool relief it offers. However, Aloe vera has far more health-supporting benefits than merely being the go-to remedy for small burns and sunburn relief.

As one 2013 study published in the journal Organic and Medicinal Chemistry Letters put it, “Due to its phytochemical composition,” aloe has shown promise in “alleviating symptoms associated with/or prevention of cardiovascular diseases, cancer, neurodegeneration, and diabetes [5].”

According to Encyclopedia.com, one of the most important phytochemicals (plant chemicals) found in Aloe vera is the polysaccharide acemannan (also known as acetylated mannose). The 2013 journal article mentioned above states that acemannan has been found to be:

“a highly effective immune stimulant, with activity against the viruses causing the flu, measles, and early stages of AIDS. It has been used effectively against some veterinary cancers, most notably sarcoma, and is being investigated as an agent to be used to treat cancer in humans [6].”

Whether you’ve favored the store-bought preparations, or cracked open a chunk of home-grown Aloe vera and scooped out the slightly sticky gel yourself, it is the slimy inner tissue that works its magic on the skin and body. This water-heavy gel is the part of the plant that holds the most bioactive compounds (phytochemicals).

According to researchers, the powerful active compounds in Aloe vera include [7,8]:

The Benefits of Aloe Vera for Digestion & Skin

With the volume of bioactive compounds and properties available in Aloe vera, it should come as no surprise that studies into this gift of nature demonstrate this medicinal plant has other benefits to health. In fact there is a plethora of research to be found in PubMed, with close to 3,500 studies being listed that include investigation into Aloe vera [9].

Some other benefits of Aloe vera of note include:

Apart from burns, Aloe vera may be most famous as a digestive aid. This is mainly due to the latex (the yellow liquid just below the skin that surrounds the gel). It’s a known laxative that was used for many years in the United States [10].

Due to its potency and concerns over toxicity it was banned from over-the-counter use in 2002 [11]. However, the FDA does state the following about Aloe vera toxicity in a March 2016 briefing document for the Pharmacy Compounding Advisory Committee (PCAC).

“Reports of previous human experience as a food, dietary supplement, and herbal medicine in the U.S. and other parts of the world, with data reported online in the Natural Medicines Comprehensive Database and other sources (e.g., USP, WHO monographs, PubMed), suggests that Aloe vera products are generally well tolerated. Moderate and infrequent oral consumption of Aloe vera gel preparations (containing no anthraquinone derivatives) as food/beverages appears reasonably safe based on the marketed use of various products [12].”

In large amounts the anthraquinones in aloe do have a powerful purgative effect. (Purgative refers to a substance that loosens stools and increases bowel movements). According to research published in the Internet Journal of Microbiology, in smaller amounts anthraquinones aid the microbiome by increasing absorption, and acting as potent antimicrobials (killing less desirable bacteria) [13]. In addition, aloe has been noted to improve the bioavailability of vitamins in humans [14].

There is some controversy surrounding the benefits of aloe for Irritable Bowel Syndrome (IBS), with some claiming there is no definitive evidence. However, one 2013 study found that 33 patients consuming aloe twice daily had decreased discomfort [15]. It’s important to note, however, that this study found no notable difference in urgency or consistency.

There is also evidence from a 2014 animal study that ingesting aloe may assist with digestive issues involving imbalanced levels of stomach acid [16].

Aloe vera doesn’t just help your skin with burns; topical application has been found to offer some skin protection by absorbing ultraviolet light, reducing both melanin formation and hyper-pigmentation [17]. ce that the baby shoots of Aloe vera support healthy skin by offering protection from the aging effects of sunlight [18]. A compound known as lignin in aloe assists aloe with its skin-nourishing abilities by aiding the penetration of active compounds [19].

Aloe vera has also been reported to have potent antibiotic, antivirus, antifungal, and anti-inflammatory effects on the skin, including the ability to help rid wounds of necrotic (dead) tissue [20-23].

Other studies have demonstrated that aloe may aid in maintaining younger looking skin by helping to increase collagen production and improve collagen elasticity, as well as reduce redness of the skin [24,25].

When using aloe at home for skin applications, don’t simply squeeze out the gel from a cut leaf. This will also give you the yellow latex, which can cause irritation. Instead, scoop out the gel, leaving behind the lower layer between the skin and inner gel.

The main problem with consuming aloe is the bitter taste of the yellow latex. For this reason many people like to use it in a smoothie with other ingredients. Another important consideration is that it’s generally way too strong to eat large quantities due to its laxative properties. Separating the gel from the latex and the prickly skin is no easy feat, either. This is likely why many consumers resort to either a liquid form – either the juice or an extract in supplement form.

In the case of aloe juice, it’s important to remember the juice is likely to contain only the gel, mixed with a great deal of water, and thus will not provide several of the active compounds that are present in the green of the outer leaf.

In order to get all the health-supporting benefits of this amazing plant, look for an extract of superior quality, that is harvested and processed responsibly, from a manufacturer you trust.

[4] The Efficacy of Aloe Vera Used for Burn Wound Healing: A Systematic Review

[14] Antioxidant and Prooxidant Properties of Caffeine, Theobromine and Xanthine