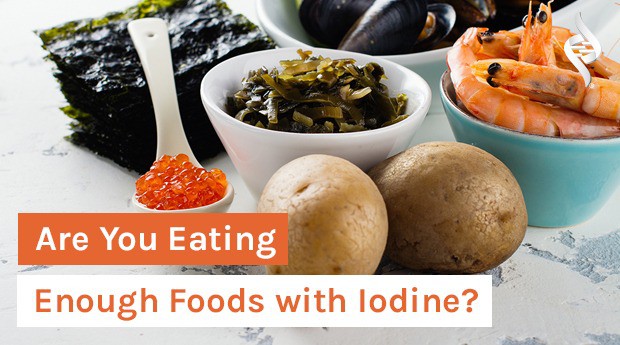 Are You Eating Enough of These Foods With Iodine?

The World Health Organization (WHO) estimates that about 2 billion people globally are iodine deficient [1]. Iodine is one of the most important essential minerals since it is needed for just about every cell in the human body [2]. If you’re not eating enough foods with iodine, then you may be among the billions of folks who are deficient in iodine.

Read on to discover foods with natural iodine in them, and pointers as to when it may be time to supplement with iodine for your health.

Why More People Need to Eat Foods With Iodine in Them

If you think that a sprinkle of some iodine-fortified table salt on top of a meal is enough to get the amount of iodine your body needs… think again.

While an “overt deficiency” of a certain nutrient can be immediately life-threatening (think vitamin C deficiency and scurvy), subclinical deficiencies of nutrients can be just as damaging in the long run.

“Subclinical iodine deficiency” is when the body gets enough iodine to prevent severe conditions such as goiter and birth defects, but not enough to prevent chronic disease.

These conditions of iodine deficiency can run the gamut from fibroid tumors and hypothyroidism to “brain fog.” People who have iodine at the subclinical level are also at greater risk for thyroid, breast, and prostate cancer [3, 4]. Unfortunately, the “Recommended Daily Allowance” (now called the Dietary Reference Intake or DRI) for iodine hasn’t changed much since the 1940s. During that decade, the U.S. National Institutes of Medicine put the current RDA into place in response to an epidemic of severe iodine deficiency in the Great Lakes and Appalachia area known as the “Goiter Belt [5].”

Many of the signs of low iodine levels are the same as low thyroid function (hypothyroidism) since the thyroid is the organ that requires the most iodine as “food.”

These low thyroid symptoms can include:

The gut, salivary glands, and reproductive systems of both men and women also require iodine to function.

Foods Fortified With Iodine: Not Always a Healthy Source

When iodine was first introduced in table salt (and also in fortified bread) in response to the “Goiter Belt” epidemic, it did indeed save a lot of lives. A Boston Medical Center study found that in the 1920s, between 26% and 70% of children in the Goiter Belt area were diagnosed with “clinically apparent goiter [7].”

By the 1950s, upwards of 70% of all households in the U.S. used iodized salt.
A lot has changed in the food industry since then, however. These days, iodized salt manufacturers cut corners to save costs, often at the detriment of consumer safety [8].

Some commercial salt operations use halide substances like fluoride in their products, which ironically have the effect of blocking iodine absorption in the body [9]. [Note: Halides are a group of elements on the periodic table of elements that includes fluorine, chlorine, bromine, and iodine.]

Commercial table salt may also contain other toxins, such as talc, silica aluminate (a form of aluminum), and the chemical additive ferrocyanide [10].

Bread was one of the foods fortified with iodine in the past, but not anymore. As a matter of fact, many popular bread companies actually use iodine-blocking halide substances such as potassium bromate in their bread.
According to the Center for Science in the Public Interest, researchers first discovered the link between bromate and cancer tumors in rats over 30 years ago [11]!

Avoiding any products that may harbor iodine-blocking halides such as fluoride, chlorine, bromide, and their derivatives can go a long way towards helping the iodine that you do ingest naturally to be absorbed.

So what foods should you eat for iodine health? Here are some foods with lots of iodine naturally:

Cleanly grown and harvested sea vegetables are considered the best sources of iodine.

A 2002 French investigation discovered that the Laminaria hyperborean (also known as brown algae) and Gracilaria verrucose (aka red algae) varieties both had not only high iodine concentrations but also lent themselves to high absorption rates when consumed.

In the study, they were also the type of sea vegetables that were the least affected by heavy metals [12]. Some experts state that brown algae varieties, in particular, can contain up to 30,000 times the concentrations of iodine found in seawater [13]!

Some examples of other sea vegetables that are high in iodine include:

Commercial sea vegetable products are among the foods with iodine to avoid. Be sure that your sea kelp is sourced from a very reliable source. Your company should test for pollutants and harvest using clean practices. This is because heavy metal toxicity in sea vegetables is a concern worldwide.

Other plant foods that contain high amounts of iodine include:

Organic, hormone-free, and free-range dairy and fish are also solid sources of iodine. These include:

The Good (and the Bad) of Getting Iodine from Food

Getting iodine from whole foods is by far the most ideal way to obtain it. Whole foods like sea vegetables, lima beans, and eggs also contain the other nutrients needed to convert iodine into a form that the body can use.

There are many essential minerals and vitamins which are helpful for this conversion process. Among the “powerhouse helpers” when it comes to iodine are potassium, selenium, iron, and zinc.

Foods that contain both iodine and zinc are especially important for thyroid health. While iodine is “food” for the thyroid, zinc is needed for the conversion of thyroid hormones once they are produced. It is also needed for communication between the hypothalamus and the thyroid [14].

Examples of foods that contain both iodine and zinc include:

Some foods that are high in zinc alone include:

Why Your Body Needs Selenium to Absorb Iodine

Another element needed for safe iodide and iodine conversion is selenium [16]. Iodine in foods comes mostly in the form of iodide. During this conversion process, hydrogen peroxide (H2O2) is created in the body. H2O2 is necessary too, in the right amounts. Too much, however, can lead to oxidative stress. Selenium has the ability to neutralize excess H2O2.

A 2002 study found that upping selenium levels to 100 mcg/day over nine months increased glutathione levels (the “master antioxidant”) and reduced the number of antibodies associated with autoimmune thyroid disease [17].

When Iodine From Food Is Not Enough

For most individuals, challenges regarding iodine have to do with getting too little, not too much. Low iodine is directly related to low thyroid function, or hypothyroidism, a condition that affects one in 20 American adults [18].

A prudent starting point for anyone who is concerned about their iodine levels is to get an iodine test done. Often labs can check for iodine-blocking halides as well.

When a person suffers from subclinical iodine deficiency, obtaining iodine directly from food may not be enough. The poor soil conditions that led to nutrient deficiency in the United States during the 1940s did not end with the “Goiter Belt.”

A study conducted by the University of Texas took a look at the nutrient load of dozens of the most common American crops over a 50-year period (1950 to 2000). They found that in every instance, mineral and vitamin content is declining significantly over time, and poor soil quality is largely to blame [19].

Potassium iodine from kelp is probably the most common source of iodine found in supplement form. The best way to get the iodine you need, however, is through using a nascent iodine supplement.

Nascent iodine goes into your body cleanly, does not need to be converted, and begins to affect healing mechanisms right away. Organixx Nascent Iodine is USDA Certified Organic and does not come from kelp, so there is no risk of chemical residue.

Don’t be a statistic! Stay away from processed foods, commercial table salt, and halide sources that may be depleting you of iodine. Instead, make the switch to whole foods that contain not only iodine but other vital nutrients as well.

And if you are suffering the effects of hypothyroidism or autoimmune conditions that can lead to thyroid imbalance, consider supplementing with USDA Certified Organic Organixx Nascent Iodine, the safest, most effective type of iodine available.

[2] Iodine Deficiency - An Old Epidemic Is Back

[6] What is Hyperthyroidism? What Are the Symptoms?

[8] The Truth About Salts and The Chemical Industry

[9] The Health Dangers of Table Salt 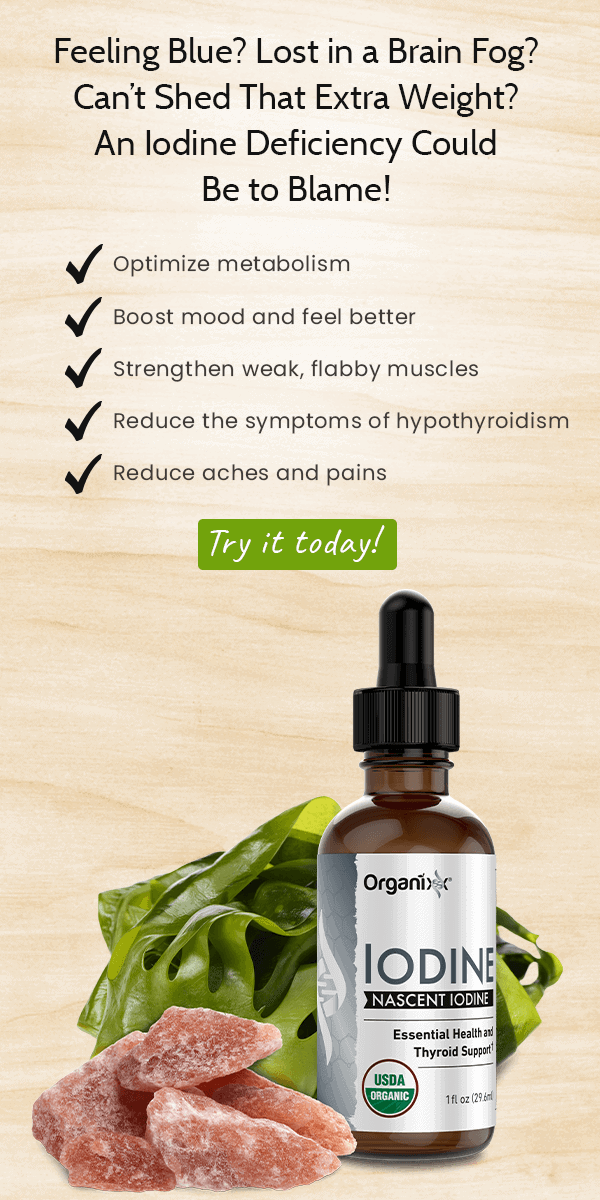